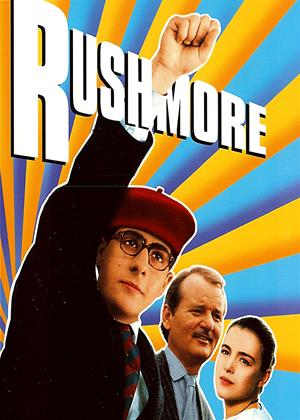 If you are looking for a unique, offbeat film, full of humour and full of great characters, then this is right down your street. Rushmore has a fun energy which keeps things interesting and enough quirky off the wall scenes that make you marvel at the pure genius and creativity of writer and director Wes Anderson. Jason Schwartzman's portrayal of 15 year old Max Fischer is perfect as the likeable underachiever obsessed with being at the center of every extracurricular school activity associated with his beloved Rushmore. Bill Murray also delivers a great performance as multi-millionaire industrialist Herman Blume, friend of Max and subsequent rival for the affections of first grade teacher Rosemary Cross. A truly great film!

Max Fischer is a precocious Jewish American 15 year old with mature social skills, able to master adult skills, like directing plays and orchestrating school business cases. Whether or not you find this funny or even entertaining is up to you. I found it poorly acted in the most part, unoriginal, and unfunny. Probably funnier for people who identify with precocious children and like American college type films.

Some people think Wes Anderson can do no wrong. Personally I think he has both good and bad qualities, and unfortunately this film showcases the bad ones. Many of his characteristic tropes are present: a protagonist with an obsessively over-specific agenda that doesn't quite come off, a strangely retro and not altogether realistic environment, a romance that challenges taboos, and oddly over-serious children behaving like adults who haven't quite got the hang of it yet. But this time round, these elements don't come together properly at all.

Our "hero" is both wildly unrealistic and impossible to like; I was constantly distracted by the mysterious failure of the other children to bully him for being an obnoxious attention-seeking weirdo, which in real life they obviously would, mercilessly! Apart from him, every character has exactly one personality trait, if any. Brian Cox is wasted as the headmaster who constantly bemoans the fact that his favorite scholarship pupil's grades are so poor that he may have to be expelled, due to his spending so much time running every club in the school, yet he never takes the obvious step of not letting him run a ludicrous number of clubs, because the plot would be ruined if he did his job believably. The love interest is so naïve that she takes an absurdly long time to catch on that pretty young teachers really ought to strongly discourage 15-year-old pupils from creepily and blatantly fixating on them. And Bill Murray, who plays his entire part as if he's slightly concussed, is a millionaire industrialist who lets a schoolboy dominate his life because the script says so.

As the characters go through their stilted moves like chess-pieces, plausibly is completely abandoned. This isn't the kind of zany comedy where real-life rules don't apply and anyone can do anything without any lasting consequences, therefore it's both silly and slightly disturbing when our hero gets away with, amongst other things, playing a revenge prank that could easily have killed someone, and, in a casually mentioned accident caused by his own irresponsibility that we don't actually see, permanently maiming another child with explosives. It's even implied that he would have no moral qualms about committing murder!

Basically, this is the story of a creepy adolescent psychopath who, because Wes Anderson understands locations far better than people, is supposed to be lovable. He isn't. It's all very skillfully crafted, but underneath the meticulous workmanship, the characters are soulless puppets I didn't believe in, let alone care about.

This film is a combination of one of the most bizarrely unbelievable plots, with some excellent acting, music and filming. On their own the shots are good - but together they don't really make a good film.