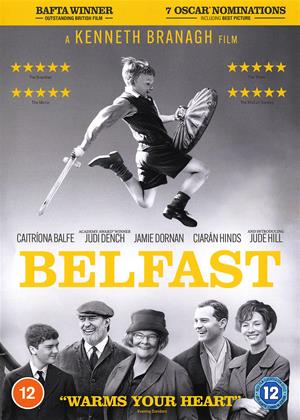 Kenneth Branagh’s curiously nostalgic piece is every bit the contradiction in terms that it sounds like: you can sort of see what he's trying to do - give a bittersweet picture of the beginnings of the 'Troubles' through a 9-year old's eyes , but despite some powerful scenes the whole thing is so drenched in sentiment that it's very difficult to take seriously. In stark contrast to so many films about or informed by the violence that plagued the city during the latter half of the 20th century, 'Belfast' ultimately opts for romanticism over realism at every turn. It's also a film that wants desperately to be a work of art, but it takes more than black and white cinematography and an affecting central character to bring this off successfully.

The opening sequence is pretty good - Jude Hill as Buddy sword-fighting an innocent swarm of other children in a frenzied street scene interrupted by a mob of angry Protestants looking to cleanse the neighbourhood of the remaining Catholics. Jude Hill as Buddy is all a bit one-dimensional throughout, but there are strong performances from Jamie Dornan as his all-too absent father, who balances his excellent performance between the decency of a man who refuses to raise a fist to his neighbour and the fragility of one who’s concerned about the well-being of his wife and sons, and Caitríona Balfe as Buddy’s similarly beautiful mother, pictured with the elegance of an adult trying to picture what his mother looked like in her prime, and in whose mouth is put the film’s most pivotal speech. There is an irritating Judi Dench as Buddy’s spicy grandma (her Irish accent is worse than mine), but she is offset by the wonderful Ciarán Hinds as her ailing husband of 1,000 years (and Buddy’s confidant). “There’s only one right answer,” Buddy says when talking to his grandpa about the brewing Troubles. “If that were true,” his grandpa replies, “people wouldn’t be blowing themselves up all across this town.”

Branagh creates a vivid sense of Buddy’s home life — warm, chaotic, rooted to the soil — and of a city whose rapid descent into violence threatens to smash the idyllic snow-globe that is his world. There's a great touch of a bellicose, Wellesian minister at his church scaring the boy into drawing a literal road map that divines heaven from hell, a striking (presumably autobiographical) detail in a film full of them, and an underwritten thread in a film that doesn’t have many (Buddy has an older brother and sister, but the characters' only purpose is as supplements to Buddy, which is a shame). And there's some lovely scenes as Buddy and his family watch such classics as 'The Man Who Shot Liberty Valance' and 'Chitty Chitty Bang Bang' (where the film is momentarily in colour), attesting to cinema’s transportive and inspiring nature; Branagh shrewdly conveys how films are intimately enmeshed with our memories of the past. But because the film underplays the tensions and grievances of the Troubles for such a long stretch of its running time, scenes that attempt political profundities are less an acknowledgement of truths that can no longer be shielded from a child than simply intrusive melodrama.

The film is soundtracked by an incessant string of Van Morrison songs that strain to convey some of the happy-go-lucky childlike energy that’s missing from so much of the camerawork. It’s a telling detail of a very personal film that — despite shimmering with the essence of Branagh’s love — sorely lacks a point-of-view or a sense of cohesion. All in all, lots of charm, but rarely convincing - a retreat from reality rather than an engagement with it.

When one realises that Branagh himself was the same age as the main character Buddy when his family left Belfast for England, one perhaps understands better why this film seems so relentlessly rose- coloured. The acting is wonderful, but all the characters, except the Protestant thug, are wise and loving and deliver speeches full of homespun wisdom. Whether Branagh's own grandfather was a charming old philosopher I have no idea, but I'm confident that in 1969 old men didn't talk about "knowing who you are" as Ciaran Hinds is made to do. This is a shame, because so many opportunities were missed to show how the forces of bigotry and resentment were able to flourish in a society that was outwardly law abiding but fundamentally unjust. Hatred doesn't appear overnight and it was dishonest of Branagh to ignore the part played by the rise of gangsterism among ordinary but disadvantaged people. As an affectionate look at Branagh's own childhood memories the film is nice but shallow. As any kind of portrait in depth of Belfast it is quite inadequate and sentimental.

A remarkable, warm film about childhood and the innocence that comes with it as well as the confusion of watching adults and trying to deal with the emotional conflicts. This is a semi-autobiographical film from director Kenneth Branagh about growing up in the late 60s at the start of the Troubles in Belfast. The film is told through the eye and experience of young Buddy (Jude Hill) the second son to his Ma (Caitriona Balfe) and Pa (Jamie Dornan). They are a protestant family but live in street with a mix of catholics too. Whilst the Troubles forms the backdrop of the film this is more a film about growing up and seeing their world through the bewildered eyes of a child. In that sense it's a nostalgic film which uses it's monochrome cinematography to create that sense of the past. This works extremely well and the film has a warmth while still showing the fear that children feel from experiments with shoplifting to the witnessing of riots and threats from extremists. With a support cast that includes Ciaràn Hinds and Judi Dench as Buddy's grandparents this is a film that really gets to grips with childhood and all the mysteries of life that a child sees. Branagh also rightly indicates the Irish Troubles as a religious conflict that destroyed and changed lives. A really interesting and quite touching film that is worth a trip to the cinema.