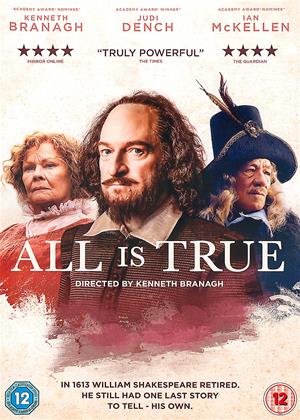 Synopsis:
"All Is True" explores the human story behind a dark and little known period in the life of William Shakespeare (Kenneth Branagh). The year is 1613, Shakespeare is the greatest writer of the age. When his beloved Globe Theatre is burned to the ground, he decides to return to his home town of Stratford-upon-Avon. There he faces his neglected family. Still haunted by the death of his only son, Hamnet, he struggles to mend broken relationships with his wife, Anne (Judi Dench) and daughters. In so doing, he is ruthlessly forced to examine his own failings as an absent husband and father. In the search for peace, he must also finally confront the dark heart of his family's secrets and lies.
Actors:
Kenneth Branagh, Judi Dench, Ian McKellen, Nonso Anozie, Lolita Chakrabarti, Darryl Clark, Jack Colgrave Hirst, Doug Colling, John Dagleish, Eleanor de Rohan, Clara Duczmal, Phil Dunster, Freya Durkan, Sam Ellis, Sean Foley, Hadley Fraser, Gerard Horan, Matt Jessup, Harry Lister Smith, Alex MacQueen
Directors:
Kenneth Branagh
Producers:
Kenneth Branagh, Ted Gagliano, Tamar Thomas
Writers:
Ben Elton
Studio:
Sony
Genres:
British Films, Drama
Countries:
UK

Bland, and tedious throughout. - All Is True review by RM

""All Is True" explores the human story behind a dark and little known period in the life of William Shakespeare."

The thing about "little known" is you can make up whatever you want, to say this is "All is true" is basically a lie, they could have done far better, Shakespeare Vs vampires? or Abducted by aliens? would have been crass but at least entertaining. But they decided to make a film about nothing very much at all. I was going to say this film was boring but this goes beyond that it's just bland a kind of Elizabethan soap where very little happens apart from day to day life dragging on.

This really is another Branagh self indulgence production, dragging the usual luvvies out of the toy chest.

I'm dismayed that this was penned by Ben Elton, he really is better than this and should have stopped at Upstart Crow, at least being a comedy there was his wit to entertain us, this isn't entertaining, it's the diary of a retired old sod who does what a lot of retirees do, he took up gardening, and boy it was like watching paint dry.

This isn't history, but made up non history. I guess a kind of fake news that no one will be interested in.

A Vanity Project too far - All Is True review by JR

We see Shakespeare in the late autumn of his life - cue shots of frosty autumn leaves and dark, candlelit Tudor interiors. There is no variety in the cinematography as all the outdoor scenes are shot from ground level upwards. The scenes of Shakespeare in his garden are laughably amateur with what must be potted plants plonked on the ground and, again, shot from below. Characters, including Shakespeare himself, recite the poetry, which only serves to underline the extremely pedestrian nature of the language and plotting of Ben Elton's screenplay. Even great thespians such as (director and producer) Branagh, Judi Dench, and Ian McKellen fail to breathe life into it.

Outstanding! - All Is True review by PM

I have to say that I couldn't agree LESS with the other reviewers on this page. The film is restrained, poetic, witty, magical, convincing and rich in brilliant performances which portray many of the finer and deeper energies at work in human life. It is NOT an action movie (Thank God!) and is stimulating in a very different way. A little patience is certainly required, as with anything that's worth having, and if you are not too demanding, you may not be disappointed.

Shakespeare With Writer's Block? - All Is True review by BG

Kenneth Branagh has acted in many of Shakespeare's plays, now he gets to play the bard himself, looking a bit like Ian Anderson from Jethro Tull. I liked the way it didn't focus on his play writing, and showed the tortured side of a man who has retired back home, mourning his dead son and discovering a shocking truth. Written by Ben Elton, who Branagh directed in Much Ado About Nothing, there is some wit but not a lot of comedy. Applaud the bard when he finally hurls abuse at a man who has always snubbed him. There's some nice imagery - - the bard walking in slow motion amongst autumn leaves blowing - - but probably fans of Fast and Furious will not go for it.

Not Upstart Crow - All Is True review by Pete W

Perhaps some reviewers saw that this film was scripted by Ben Elton and expected a feature length edition of Upstart Crow. That is indeed a very enjoyable comedy but this is a different beast. Taking what little we know about Shakespeare’s life, the film shows Will at the end of his life having retired from playwriting dealing with the earlier death of his son and some inappropriate behaviour for the time from his daughters.  The film really benefits from having such Shakespearean luminaries as Branagh, Dench and (briefly) Mckellan in the lead roles, bringing their understanding of Shakespeare and his plays. An enlightening interview with Branagh and other extras explain a lot about the film and its production. Special mention to make up for making Branagh almost unrecognisable as Will.

Disappointing - All Is True review by LA

A wonderful cast wasted, and one of the film's themes, the creation of a garden was a huge disappointment - could they not actually have created a beautiful Shakespearean garden instead of showing endless pointless shots of him digging?

Dull Dull Dull and Dull - All Is True review by AL

Good grief, I didn't last long and had to forward on to the end. But for the brief time lasted, I found it so slow and Dull, just aweful. I loved Upstart Crow and can't believe thanks written by the same person. Very disappointed.

Great film - All Is True review by SA

This was a beautifully made film, atmospheric and elegiac.  The acting was superb, and this ending part of Shakespeare's life was most moving.  Ben Elton writes a great script and really knows how to turn life with few facts into a fictional delight of great interest. It was slow and gentle, but this in no way detracted from its quiet power. Thank you Kenneth Branagh.

A Branagh vanity project - All Is True review by DK

I am a fan of Branagh and his acting is always superb (in this, too) but this is a pretty ropy film. What on earth is doing with that stupid garden? I reckon that he and Ben Elton were drunk when they conceived of this film. Next!

Enjoyable - All Is True review by KM

Reading many of the reviews, we were apprehensive about choosing this film, but we enjoyed it. Yes there was some over acting and self indulgence, but on the whole we found it to be an intelligent take on an unknown part of the Bard's life with lots of references to his works. We would fault the use of modern gas fires more than the script.

Watchable But - All Is True review by AA

there were so many opportunities where a better script could have made the finished product so much better.  The stand out scene was the confrontation of Shakespeare and the Earl of Southampton and I could feel tension between Messrs Branagh and McKellen as to proceeded.  Visually good to look at, but that does not make a great film and whilst the actors tried their hardest the failings of the script was their downfall.

All Is True review by Mark McPherson - Cinema Paradiso

Kenneth Branagh has such a fervent love of William Shakespeare that of course he would make a film like All is True. How could he resist directing a film about the twilight years of the tortured writer where he gets to play said writer himself? While this act seems familiar, it’s hard to fully fault Branagh for putting all he has into such a film, even if it doesn’t touch upon much most profound.

The story takes place in 1613, soon after the Globe Theater burned down in a disaster. Shakespeare, saddened, returns home to Stratford to find a less than accepting return from his family. Having been gone for so long, they’ve become used to him not being there and shutting out his past. One can understand why given that there are troubling memories within his estate, being haunted by visions of loved ones departed. His wife (Anne Hathaway) tries to offer comfort but how much can she possibly give with a tortured artist having been absent for so long? He’s been away for so long and she doesn’t expect him to stay long either.

Struggling to find some sense of inspiration and purpose, Shakespeare takes to gardening. An odd choice in a hobby to the outside but not so strange personally considering his connection to the loss of life within his home. Through his gardening, a peace set over him. A comfort takes hold. A slight glimmer of inspiration returns, speaking more freely about how to write, what to write, and what makes us write in the first place. He speaks a certain truth when asked about writing, that one must have trust in themself and honesty in their love for putting the pen to paper. As long as one is true to themselves, all will be true within the writing that is composed.

Branagh’s picture meanders between heartfelt melodrama and inspiring observation. There are quiet moments that tap into the brilliance of Shakespeare’s appeal, especially during a stirring conversation with Ian McKellen in the role of the Earl. But then there are moments that feel too expected as when Shakespeare has a conversation with the ghost of his family. For a film that wants us to see something more and peer into the mind of a gifted writer, scenes like these feel too on the nose that seems more serviceable in a blunter and less thoughtful picture that struggles to find something unique about the historic figure.

All is True manages to muster an ounce of quiet understanding from a man who dug the writer almost a little too much. Armed with some strong performances and a lightly beautiful tone, there’s just enough here to be a pleasing period piece, if not a self-serving one for the obsession of Branagh once more.