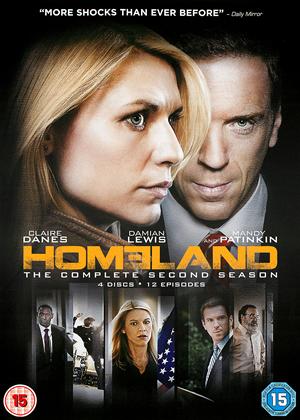 Based on an Israeli TV series called Hatufim Homeland is an American drama series now in its second season; the show follows US Marine and former prisoner of war Nicholas Brody who, upon returning to the United States, comes under investigation for being turned whilst in captivity.

The excellent but small cast of the show are well placed to present the drama and tension inherent in such a socially potent story, with Brit Damian Lewis in the lead as Nick Brody and Claire Danes as the CIA agent heading up his investigation, the show pits both sides of battle against one another with some very intense results.

One of the most ingenuous aspects of the show is the characterization of the central characters Nick Brody and Carrie Mathison (Danes); Mathison’s belief in Brody’s guilt coupled with her own erratic personality cause the audience to question many of her assertions, whilst Brody’s own steady demeanour make it almost impossible to imagine him as a violent terrorist. Yet with such high stakes one can’t afford to take any risks… can they? What ensues is a gripping ethical quandary.

The mystery that acts as the central turning point of the series is set off brilliantly with small subplots and loveable, hateful and enigmatic characters; all of whom are armed with a fantastically quick and expressive script that comes from some of the minds behind the X-Files, Numb3rs and 24. With the third season set for TV release later this year so far Homeland has managed to keep to it’s original high class heights; the tightly knit story still unwinding with a well tailored combination of ease and casual speed that leaves you eager for the next episode as soon as the last one is over.

My only real qualm with the show is the relentless suspense that, although always leaves you hankering for more, can be a bit overwhelming after a while. I wouldn’t recommend watching all 12 episodes in one sitting as you’re likely to find yourself paranoid and headachy by the end. But for those looking for an interesting and intelligent mystery drama this multi-award winning show is sure to suit.