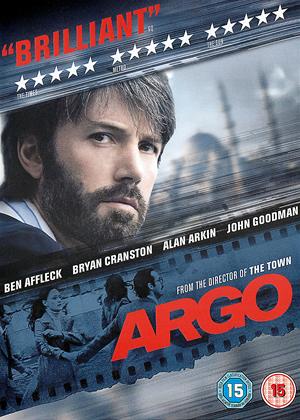 Cinemadiso's And The Oscar Goes To...
10 films by cinemadiso
SOL's Rented
540 films by sol

This is a watchable movies. However, it is almost entirely fiction - NOT a true story: 1) the British embassy did NOT in real life turn any Americans away; 2) The Canadians were largely responsible for getting the 6 out, not the USA or the CIA; 3) most of the things here are invented - for example ALL the obstacles the 6 face en route to the airport.

So enjoy it as a caper movie and fiction. The problem is, most people will see this as fact - just like those lie-drenched 'America won the war single-handed' movies (Private Ryan, U571 etc etc etc).

Arrogance which looks rather hollow when one realises the USA is burdened with debt it cannot pay back and now is owned mostly by Arab states and in hoc to China. No wonder so many hate America when its propaganda machine spews out lies like this.

Argo has been criticized for its portrayal of events; especially for minimizing the role of the Canadian embassy in the rescue, for falsely claiming that the Americans were turned away by the British and New Zealand embassies, and for exaggerating the danger that the group faced during events preceding their escape from the country.

The six American diplomats had earlier been given sanctuary when they turned up unexpectedly at the British embassy's summer compound in northern Tehran,

Yet not only does Hollywood's account write out the British officials who sheltered the Americans but it also claims, falsely, that the US staff were "turned away" from the British embassy in their hour of need

The film's script also fails to credit the New Zealand diplomats who helped the group's passage to safety.

Early in the film, Affleck's character is briefed on developments by his CIA supervisor Jack O'Donnell, played by Bryan Cranston. He explains that the six US Embassy staff had escaped and been given refuge by the Canadians: "Brits turned them away, Kiwis turned them away."

But Mr Anders, 87, said: "That is absolutely incorrect, absolutely untrue. They made us very comfortable, the British were very helpful and they helped to move us around to different places after that too.

"If the Iranians were going to start looking for people they would probably look to the British. So it was too risky to stay and we moved on.

"They put their lives on the line for us. We were all at risk. I hope no one in Britain will be offended by what's said in the film. The British were good to us and we're forever grateful."

Argo is the latest in a long line of Hollywood movies to twist British history for their own dramatic ends.

U571, starring Matthew McConaughey, rewrote the Second World War so that American servicemen captured an Enigma code machine rather than British sailors. Mel Gibson took many liberties with British history in Braveheart (1995) - including depicting his Scottish warriors in kilts hundreds of years before the garments were introduced - and in The Patriot, his heavily fictionalised account of the American War of Independence.

Hmmm... I enjoyed this film and can recommend it as a well written, well directed, well acted reasonably edge-of-the-seat affair. It won 3 Oscars and 3 BAFTAs - so why do I say 'Hmmm...' ?

The intro says 'Based on a true story'. Well, it is indeed 'based' on a true story but it's by no means true. It is of course, a Hollywood drama. It reminds me very much of those American films where America 'won the war' - yes, they played an extremely important role, but ignoring the role of the other Allies is unforgivable. And so it proves here.

I have to confess my ignorance - when the film was praised by critics and then went on to win many awards I really didn't know much about the historical events. A quick Google and a Wikipedia search (yes, I know Wikipedia isn't always accurate) gave me a much more realistic account of the historical events on which 'Argo' is based, and if you look up 'Canadian Caper' and read the 'Historical inaccuracies' section in the film's Wikipedia article you'll get some idea of reality. Suffice to say that the 6 Americans were indeed assisted by the Brits, they weren't all cooped up in the Canadian Ambassador's residence, the New Zealanders drove them to the airport, and they left without fuss and without any last minute dash for safety. So that's why I say 'Hmmm...'

Having said all that, I did enjoy the film. Ben Affleck both directs and (of course) takes the lead role as Antonio 'Tony' Mendez the CIA man, and John Goodman gets to play a straight role for once. I enjoyed it but I'm not convinced that it was really worth all those awards - it's too US-centric for me. 3/5 stars.

Knowing no great details of the true story this film is based on, I can only review the film, not the accuracy.

I admit to not being a big fan of Affleck prior to this. Firstly his acting was terrific as a CIA man on the fringes brought in for the escape plan. He plays the role of trying to get the hostages to trust him in a very believable understated way. The acting by the hostages is phenomenal, trying to look calm as they try to pass through many check points, but their tension (including Affleck) is almost palpable.

Great performances, adding plenty of humour, by Armin and Goodman, the Hollywood insiders who add credibility to the shooting of a film cover. Well worth a viewing, thoroughly good.

A very good movie, despite the fact it takes liberties with the truth - Argo review by Philip in Paradiso

This is a very well-made political thriller. In November 1979, Iranian activists storm the US Embassy in Tehran in retaliation for President Jimmy Carter’s giving the Shah asylum in the US during the Iranian Revolution. While c.55 of the embassy staff are taken hostage, 6 avoid capture by sheltering in the Canadian ambassador’s home. After 3 months, a CIA agent is sent over to organise their ‘ex-filtration'.

The facts are well-known and the script takes liberties with them, more particularly in a way that glorifies the CIA and the Americans (of course), while playing down the role of the Canadians, and misrepresenting the attitude of the British and NZ Embassies, which did offer to help and provide some assistance.

Having said this, it is a very good film, which re-creates the cauldron-like atmosphere in revolutionary Tehran very well, and is very good at creating a huge sense of tension and suspense. B Affleck is competent in the way he plays his part, although rather wooden and expressionless. Then again, I watched the interview with the real-life CIA agent (see bonus on the DVD) and he is even more devoid of any facial expressions than B Affleck is in the film!

Overall, I would say it is a very good film and would recommend it.

Worth watching - Argo review by TF

Making a film about an event or period of trouble and suffering, while still making it pleasant to watch, is difficult. You have to simplify complex things, create empathy, we have to identify with the protagonist to care what happens. All of which this film does.

Best Picture Oscar in it's year for a reason. Argo is great. - Argo review by IanF

This is a must watch, a true story released from 'TOP SECRET' only recently. The tension is unbearable by the end, but the build up is often funny too. Do watch it!

Watch it, enjoy it, but beware the usual US triumphalism. - Argo review by MP

Being almost as egregiously misleading as U571 I have to say this was an entertaining and at times gripping film. The basic plot is unbelievable but essentially it happened. Only 80% of the idea was Canada's and the Kiwi and UK embassies didn't turn our allies away. The main US player in reality was a latin chap, who must have been very brave, so Affleck took that part. But it's a good , well acted, exciting, involving film but the deliberate historical distortions leave an unpleasant taste.