Rent Horror of the Blood Monsters (1970) 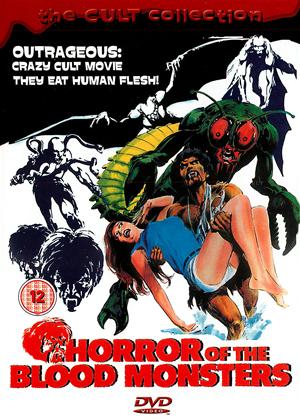 Rent other films like Horror of the Blood Monsters

Reviews (1) of Horror of the Blood Monsters

If this is one of Al Adamson's most popular films, I dread to think what the unpopular ones must be like! Actually I've seen several of them, which makes me wonder why I ever put this on my rental list. I think I must have mistaken it for one of a thousand other trashy horror films with similar titles, most of which at least manage to be better than this woeful gobbler. Seriously, watch it back to back with "Plan 9 From Outer Space" and you'll realise that, contrary to popular belief, the notorious Edward D. Wood Jr. was actually quite talented. Because this movie really, truly looks like something scripted by a very disturbed ten-year-old and directed by a cat.

There simply isn't room to list everything that's terrible about this Frankensteinish monstrosity cobbled together from whatever mismatched bits and pieces Al Adamson happened to have lying around, but its worst problem is that it's actually two completely unrelated movies randomly combined, one of which is a sub-Star Trek voyage to a distant planet starring a very old and not very happy-looking John Carradine, several actors you definitely won't have heard of, and Vicki Volante, whose "acting" is so bad that asking her to play a human being was a serious piece of miscasting.

The other is a gleefully ultra-violent load of nonsense which I assume from the cast's facial features to be of Philippine origin, involving a war between two prehistoric tribes, one of whom appear to be neanderthal vampire orcs (or something), and featuring a menagerie of cheap and cheerful monsters ranging from dinosaurs and lobster people to a mammoth played by a real elephant wearing a fur coat. Inconveniently, the space epic is in colour while the caveman capers are in black and white, but the joins are cunningly disguised by a mysterious property of the alien planet's atmosphere which causes everything to be only one colour at a time. Of course, the astronauts can't interact with the monsters or cavemen apart from a few extras and one cave-lady who miraculously manages to be in both films by turning into two different actresses. But they can point off-screen and then sit back and relax while the film ignores them completely for a while. During one especially long caveman interlude they even take the opportunity to have a cigarette break. Literally.

And then there's the totally irrelevant futuristic sex scene between two waste-of-space characters which is presumably meant to show us what "Barbarella" would have looked like if its budget had been five bucks, the irritating electronic bleeps and bloops accompanying the sci-fi scenes in case we're having trouble telling the difference between spacemen and cavemen, and of course the bizarre prologue which seems to promise us a parody of a Dracula movie written for and by small children, but turns out to have nothing to do with anything, and is obviously there to provide enough footage to create a trailer so misleading it might fool people into thinking this was something they might want to see. And...

Enough already! This movie is so bad that you assume nobody involved with it in any capacity can possibly have been even slightly talented, unless you're paying attention to the opening credits and notice that the director of photography was Vilmos Zsigmond, who had the same job on a modest little film called "Close Encounters Of The Third Kind". And even he can't provide this dismal mess with the tiniest spark of competence, let alone quality. Or maybe after he read the script he simply couldn't be bothered. Which is exactly how anyone who isn't a visual masochist should feel about renting it.