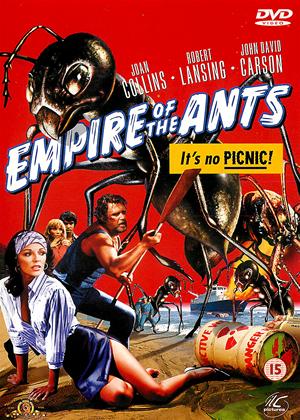 Reviews (2) of Empire of the Ants

Contender? - Empire of the Ants review by CP Customer

This has to be a contender for one of the worst films ever made. Wooden acting, terrible special effects, plodding storyline. Unfortunately it doesn't even fall into the 'so bad it's good' category. It's just awful.

Bugs on a boat! - Empire of the Ants review by Count Otto Black

This is the movie famous for being the one that Joan Collins hates being reminded she was in - and this is an actress who was once clawed to death by a demonically possessed baby! Unfortunately, that's all it has going for it. American International Pictures, best known for producing endless Roger Corman B-movies, were obviously trying rather forlornly, in an era when B-movies had ceased to have any real purpose, to repeat the success of Corman's Poe films with an H. G. Wells franchise directed by Bert I. Gordon, very much a C-lister even on a good day, who, possibly because his initials spelled "big", was obsessed with the idea of some animal or person growing unfeasibly large, a phenomenon which occurs in just about all his films.

Unfortunately, the plot is painfully formulaic for three-quarters of the mercifully short running time. A bunch of very seventies and thoroughly unlikeable people get stranded on a dismal beach next to a swamp, where they spend half an hour being tediously unpleasant before the ants even show up. About those ants: mostly they're real ants unconvincingly back-projected, and therefore conspicuously fail to pay any attention to the humans they're supposed to be within a few feet of and keen to snack upon. When they do attack, which happens disappointingly seldom, dummy ants are thrust into shot, while the camera shakes vigorously in a failed attempt to conceal the immobility of these oddly furry plastic insects. "Them!" portrayed giant killer ants infinitely better, and that was made in 1954. And throwing in a blatant rip-off of the music from "Jaws" doesn't make them any scarier.

After endless repetitive running away from stock footage of totally disinterested arthropods while they bitch at each other, the survivors finally stumble into a wildly improbable plot-twist which might have been enjoyably schlocky if it had come right at the beginning and provided a mystery for the characters to solve, and if it hadn't been handled as tediously as everything else, but it didn't and it was. Nobody involved can act except Joan Collins, and she obviously isn't trying - mostly her facial expression is that of somebody whose agent is shortly going to wish he had never been born. Don't waste your time.