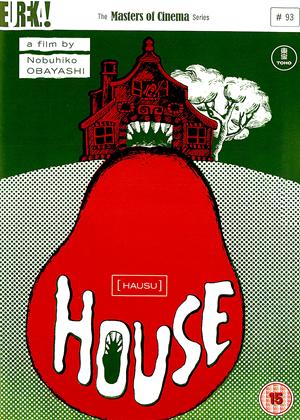 Poke her with the soft cushions! - House review by Count Otto Black

There are plenty of unique films out there, but this one is up there with "Eraserhead" in terms of being a cult classic that could never be remade, because to do a remake, you'd have to figure out what was going through the director's head in the first place, which is completely impossible. As for the cheesy seventies not-so-special effects, they actually help, since this is essentially a fever dream in which nothing whatsoever makes sense because it isn't meant to. Yes, it's that rarest of beasts, a film that's bonkers even by Japanese standards! And I mean that in a good way, as opposed to "even more sick, gory, perverted, and obsessed with schoolgirls than usual."

Okay, there are schoolgirls in it. Almost the entire cast are schoolgirls. Therefore, since this is a horror movie, quite a few schoolgirls get killed. And yet... How shall I put this? Does anybody remember the Goodies? Well, this is what would happen if those guys were real, and they tried to direct a perfectly serious horror movie. Absolutely nothing that occurs is remotely disturbing, because these (deliberately) one-dimensional characters are menaced by the most Surreal cartoon violence and peril you've ever seen. I'm pretty sure it's the only film ever made in which two different kinds of fruit manage to commit murder. Every single object in this house is lethal, so long as it isn't the sort of thing you'd normally have to watch out for in a horror movie. Forget about anything sharp - just keep an eye on those cushions...

Oh, and a special mention has to go to the cat. There are an infinite number of horror movies in which a real and visibly uncooperative cat represents the forces of evil, despite the fact that it's a fundamental law of nature that nobody will ever persuade a cat to see why it theoretically might want to attempt to act, let alone actually do so. Therefore some exceptionally wondrous state-of-the-art 1977 special effects were necessary to persuade us that this grumpy-looking brute could play the piano. Yes, really! And that's only the second most outrageous scene in this movie involving a piano. I'm not making this up. Rent the film and see. You know you want to.

A One Off - House review by CP Customer

Hausa is a deranged experience that could only be cultivated in Japan. Shot like a crazed 70’s Mexican soap with lashing of Dario Argento, its visually spectacular and innovative; you just don’t know where it’s going to turn next. This results in a real oddity as the director throws almost every technique and graphic into the mix. Ultimately it shouldn’t work, but rather than becoming a visual mess the combination of characters, directing and its colourful charm wins you over. Japan is mainly known from J-horror or the samurai or social classics of the 1950’s and 60’s, Hausa is unique.

Very Strange and Funny Cult Horror Comedy from Japan. Bonkers is the best description I can give it. Girl Eating Piano, Evil Magical Cat, Flying Severed Head, Death by Banana , Talking Water Melons , what more can I add to make you Watch it ?

This is a curiosity - made in the 1970s and it looks it. I haven't seen speeded up footage like this since the DOUBLE DECKERS were on TV! No OBs here - all filmed on obvious studio sets with surreal decoration, plus song and dance sequences,

Very odd and bonkers, and not frightening at all, more interesting.

I watched a more recent movie from Japan which also used animation as here - cannot remember the title, the Life of the Kamagochis or similar. Probably influenced by this.

But a good idea this mad collage of a movie which doesn't really make all that much sense didn't have more influence on film makers. Best keep these post-hippy curiosities back in the 1970s where they belong!

But different anyway, and more interesting that most yawnsome Hollywood haunted house movies. AND I LIKED THE CAT!