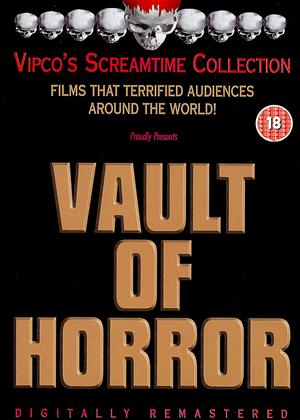 Synopsis:
Five strangers board a descending lift, one by one, in a modern office block in London. They reach the sub-basement, though none of them have pressed for that destination. There they find a large, elaborately furnished room which appears to be a gentlemen's club. The lift door has closed and there are no buttons to bring it back, nor any other exit. Resigned to waiting for help, they settle down with drinks and talk. The conversation turns to dreams, and each man tells of a recurring nightmare.

Midnight Mess
Harold Rodgers (Daniel Massey) tracks his sister Donna (Anna Massey) to a strange village and kills her to claim her inheritance. After settling down for a post-murder meal at the local restaurant, he discovers the town is home to a nest of vampires.
The Neat Job
The obsessively neat Arthur Critchit (Terry-Thomas) marries Eleanor (Glynis Johns), a young trophy wife who is not quite the domestic goddess he hoped for.
This Trick'll Kill You
Sebastian (Curd Jurgens) is a magician on a working holiday in India, where he and his wife are searching for new tricks. Nothing impresses until he sees a girl (Jasmina Hilton) charming a rope out of a basket with a flute. Unable to work out how the trick is done, he persuades her to come to his hotel room, where he and his wife Inez (Dawn Addams) murder her and steal the enchanted rope.
Bargain in Death
Maitland (Michael Craig) is buried alive as part of an insurance scam concocted with his friend Alex (Edward Judd). Alex double-crosses Maitland, leaving him to suffocate. Two trainee doctors Tom (Robin Nedwell) and Jerry (Geoffrey Davies) bribe a gravedigger (Arthur Mullard) to dig up a corpse to help with their studies.
Drawn and Quartered
Moore (Tom Baker) is an impoverished painter living on Haiti. When he learns that his paintings have been sold for high prices by art dealers Diltant (Denholm Elliott) and Gaskill (John Witty) after being praised by critic Fenton Breedley (Terence Alexander), all of whom told him that they were worthless, he goes to a voodoo priest and his painting hand is given voodoo power; whatever he paints or draws can be harmed by damaging its image.
Actors:
Daniel Massey, Anna Massey, Mike Pratt, Erik Chitty, Jerold Wells, Terry-Thomas, Glynis Johns, Marianne Stone, John Forbes-Robertson, Curd Jürgens, Dawn Addams, Jasmina Hilton, Ishaq Bux, Michael Craig, Edward Judd, Robin Nedwell, Geoffrey Davies, Arthur Mullard, Tom Baker, Denholm Elliott
Directors:
Roy Ward Baker
Producers:
Max Rosenberg, Milton Subotsky
Writers:
Al Feldstein, William M. Gaines, Milton Subotsky
Studio:
Vipco
Genres:
Classics, Horror, Sci-Fi & Fantasy

Reviews (1) of Vault of Horror

This is an anthology film of the type prolific during the 1970s, which became something of a speciality for Amicus Productions. Five fairly lightweight stories feature an exceptional cast including Terry-Thomas as the meticulously house-proud Arthur Critchit (“Can’t you do anything neatly?”), his wife Eleanor played by Glynis Johns; Daniel and Anna Massey as brother and sister Harold and Dona Rogers; Curd Jürgens as a magician on holiday in Amicus’ cut-price India doing dodgy business with a terrific Dawn Addams; Michael Craig in a grave-robbing tale alongside Robin Nedwell, Geoffrey Davies and Arthur Mullard, who were comedy actors popular at the time; finally, future Doctor Who Tom Baker as Moore, a cash-strapped painter who falls victim of voodoo magic in Haiti and gets revenge on scammer Denholm Elliot and Terence Alexander.

The framing device features Thomas, Jürgens, Baker, Daniel Massey and Craig who enter an elevator, a scene which opens the film. The loud bombastic music jars with this scene in my view. Five men, all methodically ignoring each other as people do in lifts as the soundtrack bangs and crashes around them – how much more effective it would have been if the music had been low and sinister. Anyhow, their joint destination, although none of them could foresee it, is an elaborate chamber bedecked with food, seemingly at the basement of the building. It is here they recount their stories and dreams to one another. All of them are revealed to be hugely flawed.

The final twist in the story, and just where they are, is not massively surprising, but the success lies in the way in which their fate is revealed. Never a company for lavish theatrics, Amicus nevertheless had an occasional knack of delivering something truly spine-chilling (Moore’s protracted revenge is a case in point).

The cast are uniformly excellent, never betraying their worth for the occasional silliness of the stories in which they feature. One of Amicus’ trademarks was that their films were tinged with a sense of humour that assured its audience that the horror was not to be taken too seriously. Sometimes this approach worked, and sometimes to the detriment of the tales being told, yet with such a lot going on, the pace never falters. When the comedic elements were not successful, it seemed as if the horror itself was being ridiculed.