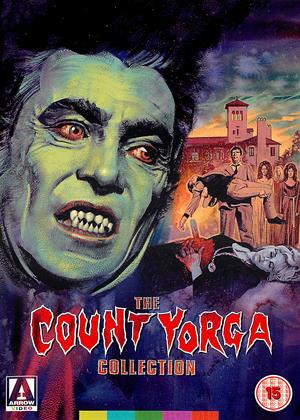 Rent other films like Count Yorga, Vampire / The Return of Count Yorga

Pardon me, but your teeth are in my pussy - Count Yorga, Vampire / The Return of Count Yorga review by Count Otto Black

Alas, poor Count Yorga, the forgotten vampire. And alas, poor Robert Quarry, the man who played him. In this era, if you were going to be a cinematic vampire, you pretty much had to be Dracula played by Christopher Lee or you were sunk. Can you remember who played the vampire in "The Brides Of Dracula", and what he was called? (Clue: not Dracula, despite the title.) If you can, you're a real mid 20th century horror movie buff, and quite possibly your name is Kim Newman.

Robert Quarry is actually very effective as a B-list Dracula willing to substitute jaded sarcasm for the effortless charisma of Christopher Lee, and his feral assaults on humans by running at them impossibly fast range from sort of scary in a nightmarish kind of way (the second of these two movies obviously had an enormous influence on "Phantasm") to hilarious whenever the camera angle makes it obvious that he's scooting along on a trolley without moving his legs. But otherwise the acting is almost totally lousy, and the women in particular are characterless vampire-fodder, the one exception being the mute lady in the second film who just happens to be played by the director's wife.

But you know what? This double bill of almost-forgotten crap is actually rather entertaining in a so-bad-it's-sort-of-good kind of way. It's very patchy indeed, and there are long dull patches, but when it gets nasty, particularly in the first film, it's very nasty indeed - one scene in particular will not appeal to cat lovers at all (see the title of this review for further details). You can almost see a semi-masterpiece trying to break through an impenetrable wall of incompetence. I'd give this two and a half stars if this site permitted a middle of the road rating, but it doesn't, so what the heck! Half a star extra for being bonkers!

PPS: This disc includes a half-hour documentary in which übergeek Kim Newman dribbles down his fashionably steampunk waistcoat about what neglected cinematic masterpieces these two films are. But then, he would say that, wouldn't he?