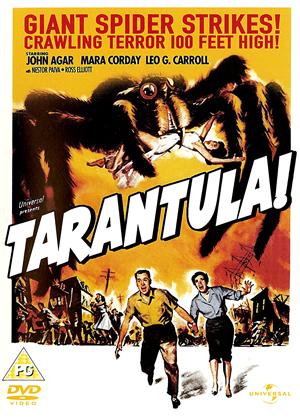 Synopsis:
When a tarantula, which has been injected with a special nutrient formula, escapes from a scientist's laboratory. it grows into a 100-foot beast that menaces the Arizona countryside. Professor Gerald Deemer (Leo G. Carroll) has been working on a special nutrient to help ease a predicted food shortage that is expected to come with the increase in human population. His experiments have been moderately successful but there have been some failures as a result. One day while he is gone, two of his colleagues inject themselves with the nutrient with disastrous results and die a few days later. One however goes mad and injects Deemer with the formula.
During a struggle, a giant tarantula injected with the formula escapes its cage and grows even larger and starts to attack cattle as well as human beings.
Actors:
John Agar, Mara Corday, Leo G. Carroll, Nestor Paiva, Ross Elliott, Edwin Rand, Raymond Bailey, Hank Patterson, Bert Holland, Steve Darrell, Wag Blesing, Dee Carroll, Edgar Dearing, George DeNormand, Don Dillaway, Clint Eastwood, Jack Hendricks, Jane Howard, James Hyland, Tom London
Directors:
Jack Arnold
Producers:
William Alland
Writers:
Robert M. Fresco, Martin Berkeley, Jack Arnold
Studio:
Universal Pictures
Genres:
Classics, Horror, Sci-Fi & Fantasy

"I might not know much about science, but I know what I like." So notes Martin Amis in a preface to his second novel Dead Babies (1975). That sentence comes to mind when watching Tarantula (1955), one of a spate of B-movies produced by Universal during the Fifties which were fuelled by hungry, deadly creatures from the Deep or the Beyond.

Or, in this case, from a Laboratory on the outskirts of the New Mexico desert.

There, a Professor - played by Leo Carroll - has been engaged upon developing large versions of familiar animals so that a burgeoning population on Earth has sufficient food; a point about population being made by Aldous Huxley, among others, at that time, and all the clearer sixty-five years on.

Naturally, the locals - such as a cookie-cutter Sherrif - are doubtful that there is a problem and that a local doctor, played by John Agar, is scaremongering when he questions things more closely - especially when he finds that the Professor's face is mutating into one which resembles the latter-day Auden. A decade earlier, Agar had married Shirley Temple, and begun to appear in films. Their union lasted but a few years, and he was never ashamed that this subsequent turn in life led to appearing in a series of such sci-fi shockers (a remarkable feature of this one is that his elegant jacket remains as impeccable as any worn by Trevor Howard in such adversity).

Along the way Agar meets a graduate (Mara Corday) who has come to help the Professor in his researches. She duly realises, as a roof crashes above her bedroom while giant eyes peer (understandably) through the window, that Agar was right. Something extraordinary is afoot - indeed the creature has eight of them, and looks as if capable of eating baths rather than skulking in them.

One might easily forget to mention that all this takes place in black and white. It is palpable, more credible - black looming against the Sun - than many a computer-generated image, as are the USAF jets which roar across the sky to see off the beast. And here comes a surprise. Uncredited, but distinctly visible, the jets' lead pilot is... Clint Eastwood, who lets rip that fatal blast of a chemical which has the creature sinking upon its eight legs and, in its death throes, definitely not liking the smell of napalm in the morning.

Man cannot live by Tarkovsky alone, and this 75-minute work by the lesser-sung Jack Arnold survives in its own right. One might come to laugh but stays to gasp. There is no doubt that Wittgenstein, who relished such films, would have wished to live to see it.