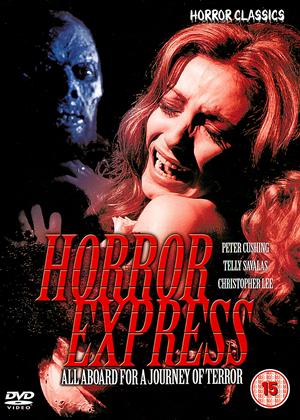 OK, I admit it, there's no way this film really deserves five stars. But you know what? Of its own very particular kind, it's a masterpiece! And if you're in the mood for a completely bonkers horror movie that piles absurdity upon absurdity while keeping a perfectly straight face, and doesn't stint on what was, for the time, seriously gory horror because it's European, there are few if any that reach the standard of this one. And it co-stars Christopher Lee and Peter Cushing! This is the kind of film Ed Wood might have made if he'd somehow been given a decent budget, and it's a hoot!

Made purely because a low-budget Spanish horror studio obtained at a bargain price a very good scale-model of the Orient Express, plus accompanying miniature scenery depicting Siberia, previously used in "Nicholas and Alexandra" (a rather dull melodrama memorable only for Tom Baker's performance as Rasputin), this has to be the only film set entirely in Siberia to be shot entirely in Spain. It's 1906, and Christopher Lee has found a two-million-year-old deep-frozen ape-man. Obviously it will come alive and kill people. Is that enough plot to keep the movie going for almost an hour and a half? No. Therefore we also get extraterrestrials, spies (it's the Orient Express - we must have spies!), mad monks, the Antichrist, and just when it seems as though it couldn't get any sillier, Christopher Lee with a sword in one hand and a shotgun in the other fighting a small army of zombies.

Peter Cushing is an absolute delight, and clearly enjoying himself immensely, as Christopher Lee's charmingly dishonest professional rival. Lee perfectly balances arrogant pomposity and reluctant heroism. Alberto de Mendoza, an actor seemingly well-known in Spain who made no other English language films, actually manages to upstage Christopher Lee as a mad monk who is Rasputin in all but name, only slightly less sane. And a special mention must go to Telly Savalas, who suddenly pops up late in the film as a mentally retarded psychopathic Cossack whose performance leaves no scenery unchewed, and whose dialogue borders on Surrealism, even compared to the word-salad spouted by every character in the movie who attempts to sound like a scientist.

How crazy is this film? Hammer, a studio not exactly famous for subtlety, liked it so much that within months they'd more or less remade it, minus the train but still starring Lee and Cushing, as "The Creeping Flesh". And it was nowhere near as good. This is an underrated classic of trashy cinema that takes very little time to get going, and then seldom lets up for a moment. If that's the kind of thing that floats your boat, this is as good as it gets. Rent it now!

Three legends together - on rails! - Horror Express review by NP

The involvement of Peter Cushing and Christopher Lee was something of a coup for producer Bernard Gordon, and it is true to say their presence does lift ‘Horror Express’ somewhat. However, for my money, their stoical, mannered characters aren’t as much fun as Telly Savalas as Captain Kazan. Kazan has barely been onscreen for ten minutes before he has shot, stabbed and whipped others around him.

Using a (very realistic) miniature train from another film (possibly ‘Pancho Villa’ from the same year), Gordon, director Eugenio Martín and writer Arnaud d'Usseau have concocted a nicely claustrophobic horror chiller. On the Trans-Siberian Express, no-one can hear you scream.

Where things become a little dull is during the second half, when it has been established that the frozen creature captured by Saxton (Lee) is up something monstrous, and the audience has little to do but wait until it continues on its path. This leads to some nice creepy set-pieces, but not quite enough to sustain the interest and this leaves us waiting eagerly for the climactic moments to take place.

Cushing was unsure about making the film, but Lee gently talked him into it. The results are good, with some fine moments of stifled horror with something running (or moving languidly) amok in a confined area. Some nicely lit moments and eerie music courtesy of John Cacavas add greatly to this. My score is 6 out of 10.