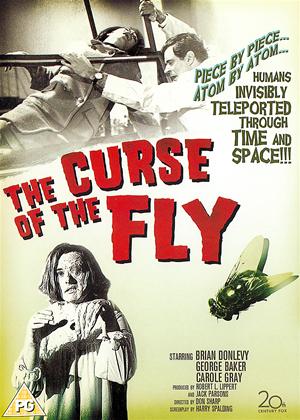 Rent other films like The Curse of the Fly

Reviews (1) of The Curse of the Fly

Your Flies Are Undone! - The Curse of the Fly review by Count Otto Black

This obscure, little-seen second sequel to "The Fly" killed off a franchise which was already struggling with the problem of the same absurdly specific accident having to somehow happen repeatedly. Which, this time round, it doesn't, the third generation of the ill-fated Delambre family having finally learned to be really, really careful NOT to teleport yourself and a fly at the same time! Though of course they're still suicidally reckless about every other aspect of doing hazardous experiments with machines that can turn you into a human centipede if you press the wrong button.

Anyway, according to the muddled continuity, which mixes up events from the previous two films and makes no mention of the fact that one character has aged so much since the first film that this one must take place round about 1990, the son and grandsons of the ill-fated André Delambre are still trying to perfect that far-more-trouble-than-it's-worth teleporter, with predictably horrendous results, most of which happened before the movie started, as did a lot of other backstory which sounds much more interesting than the events we actually get to see. In fact, the amount of time the movie spends on the subplot about a newly married woman gradually uncovering the awful truth about what really happened to her husband's supposedly dead first wife almost makes it more of a sequel to "Jane Eyre" than either of those two movies about people getting mixed up with insects!

Instead of the iconic giant fly's head which symbolises the whole franchise, the makeup effects this time around amount to not much more than the victims of failed experiments having a bit of wax or latex daubed on them to make them look partially melted, and the ultimate horror that results when two people are teleported simultaneously is barely glimpsed. To modern sensibilities, the most horrific sight in the film is the "Chinese" character played by a very non-Chinese actress, especially since her husband is played by the genuinely Asian Burt Kwouk, and whenever he's in shot with her she looks even more fake than she already did.

Worst of all, the maddest of the Delambre clan is played by that talentless drunken slob Brian Donlevy, who ruined quite a number of films, including the first two-thirds of Hammer's Quatermass Trilogy, by inexplicably becoming the go-to actor whenever you needed someone to play a scientific genius. Visibly hung over and sometimes audibly slurring his lines, he's as deeply unpleasant in character as he apparently was in real life. As for Vincent Price, by 1965 he was a lot more famous and expensive than he had been when the franchise began, so this movie quietly forgets that his character in the previous two films ever existed.

Like almost all the films this site labels "classics" because they think it just means "old", this is a deservedly forgotten low-budget obscurity in which the subplot about a young bride doubting her sanity but eventually finding out that she's perfectly sane, and it's her new husband and his nice friendly dad who need locking up, is better written, better acted, and far more interesting than the stuff about mad scientists turning people into murderous monsters that's supposed to be the entire point of the movie. The final shot is a teaser implying that we might get a fourth Fly film, possibly with an actual fly in it this time. But it would take 21 years before we met the Fly again, in what, thanks to David Cronenberg's unique view of the world, was a very different kind of movie indeed.