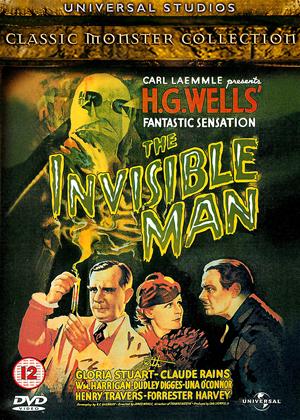 Reviews (2) of The Invisible Man

I had not noticed before how reminiscent the opening music to ‘The Invisible Man’ is to the repeatedly used scores from the 1940’s Universal monster films.

The tavern into which the heavily dressed be-hatted figure of Griffin enters, ushering with him billows of snow, could be tailor-made for the cliché legend ‘We don’t like strangers about these parts.’ Indeed, there are few stranger than Griffin: monosyllabic, wrapped in overcoat, bandages, gloves and hat. And yet the sinewy collection of cadaverous locals huddled up for warmth in ‘The Lion’s Head’ seem more eccentric yet. Una O'Connor, who would tone down her performance not one iota for Minnie in 1935’s ‘The Bride of Frankenstein’ plays landlady Jenny Hall as a shrieking willowy old cockney. When EE Clive is introduced as the village ‘bobby’, with a ‘here, wot’s all this?’ the conglomerate of grotesques is complete – suddenly, Griffin seems almost straight-laced by comparison.

Onto this tapestry, the mysterious newcomer reveals the secret of the mystery that appears to surround him. “You’re crazy to know who I am, aren’t you?” he growls as, with a merciless onslaught of John P Fulton’s magnificent special effects, his secret is revealed. “He’s invisible, that’s what’s the matter with ‘im,” concludes Constable Jaffers.

After this truly peerless first act, the rest of the film doesn’t quite match up. How could it? It is, nevertheless, hugely entertaining throughout as second-billed Gloria Stuart is introduced as fiancée Flora Cranleigh and William Harrigan as the unfortunate Kemp.

And yet it is Claude Rains, mostly unseen, who retains the acting honours as a character who traverses suspicion, hilarity, madness and ultimately tragedy in the title role. From his first appearance trudging through show that clings like porridge (perhaps that is what it was – whatever, the snowbound scenes are incredibly convincing) to his maudlin final act, he deserves every word of the praise heaped upon him. As does Director James Whale and effects man Fulton (and his team), both very much at the top of their game.

There would be recasts for subsequent sequels featuring invisible relatives, but as with every other Universal horror franchise (excluding possibly ‘Frankenstein’, which to my mind was trumped by its first sequel) this remains a classic unsurpassed.

James Whale (Frankenstein, 1931), returned to Universal for this first sound version of HG Wells' sci-fi classic. Claude Rains makes his starring debut as Jack Griffin, a scientist who invents a formula for invisibility before he discovers the antidote. Big mistake. Unfortunately, an ingredient in the elixir, monocane, turns Dr. Griffin insane as he attempts to use his breakthrough to gain power and wealth.

This doesn't have the same visual panache as Whale's other films for Universal, I guess because of the already complicated processes for designing the effects. A major weakness is the amount of knockabout comedy, which the director apparently loved. This hasn't aged that well, and actually diminishes the sense of threat and suspense.

The great triumph of the film is the astonishing in camera effects. Not only of Claude Rains removing his bandages to reveal... nothing, but at the climax when a dissolve finally exposes the face of the actor for the first time a few seconds before the credits roll. We might not see Rains, but his rich, distinctive voice gives the invisible man a valuable presence..

The film is the first Hollywood production that feels more like science fiction than a horror film with some sci-fi jargon attached. It looks at the duality of science for good and bad. It's just a bit of a shame Whale was so seduced by the comic potential of Wells' premise above any of its more serious consequences.