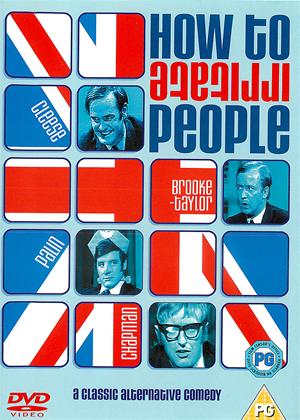 Synopsis:
Anyone can make themselves unpopular - but it takes a past master like Monty Python's John Cleese to be really irritating. The secret, he says, is to let the other person believe it's all totally unintentional - and that's just the first of many tricks of the trade he's giving away! With the help of Python pals Michael Palin and Graham Chapman, Connie Booth from Fawlty Towers and Goodie Tim Brooke-Taylor, Cleese demonstrates the uncanny ability to keep his victims just the right temperature under the collar... one degree below boiling point! Parents, waiters, salesmen, chat-show hosts - for some people, irritation is a way of life, the rest of us have to work at it.
After watching this video you'll possess the know-how you need to irritate for business or pleasure... as well as discovering where Basil Fawlty got so many of his ideas from! Find out just how to pay back job interviewers, cinema chatterboxes, garage staff, even bank clerks in the only way they deserve. And there's a gold-plated bonus for Monty Python fans to treasure in Cleese, Palin and Chapman's "Airline Pilot" sketch - an undiscovered classic of British comedy.
Actors:
John Cleese, Tim Brooke-Taylor, Graham Chapman, Michael Palin, Gillian Lind, Connie Booth, Dick Vosburgh
Directors:
Ian Fordyce
Producers:
David Frost
Writers:
Graham Chapman, John Cleese
Studio:
Prism Leisure
Genres:
British Films, Comedy, TV Classics, TV Comedies
Countries:
UK

Reviews (1) of How to Irritate People

The Monty Python team have such iconic status nowadays that it's almost sacrilege to point out that some of their material fell flatter than a very flat thing. This one-off TV special features half the Pythons plus one-third of the Goodies (remember them?) performing sketches written by themselves, so what could go wrong?

Well, a couple of things. Firstly, since every single sketch is in some way about irritation, for over an hour we get a parade of characters who sometimes cross the line between being funny and genuinely irritating the viewer. Secondly, many of the sketches are embryonic versions of Monty Python routines - some of them are literally first drafts of sketches that became famous later on - written before the Pythons had realized that it was OK to go completely nuts, so they're watered-down attempts at Python humor without the trademark anything-goes irrationality.

Michael Palin's dodgy salesman who refuses to admit there's anything wrong with the clearly faulty product an irate customer is complaining about is a direct ancestor of a certain man in a certain pet shop, but Tim Brooke-Taylor trying unsuccessfully to get him to admit that a car with pieces falling off it is defective is no substitute for John Cleese banging a very dead parrot on the counter while the salesman insists that it's "pining for the fjords". And Palin in blackface as an overly obsequious Indian waiter is both embarrassing and nowhere near as funny as he would be later in a version of the same sketch turned up to 11 and retitled "The Dirty Fork".

Along with the TV series "Do Not Adjust Your Set" and "At Last The 1948 Show", this is a missing link between the traditional sketch-based comedy the Pythons started out doing, and the full-on lunacy they invented (with a little help from Spike Milligan) and became famous for. But it's very much Python Lite, and, like so many "lost classics", it got lost because it's not really all that good.