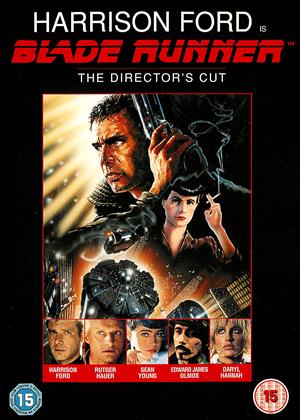 Visually this is one of the most incredible films ever made, showing stunning images of the future that have been copied in many so many movies but never really surpassed in its realistic grittiness, with the some of the most interesting, weird, eccentric and cool characters in film history tied together with a thought provoking story; all this tied together to make not just a great science fiction film but a timeless and classic piece of cinema.

After 'Alien' (1979), director Ridley Scott went on to make (among many other superb films) 'Blade Runner' (1982) and the less-appreciated 'Black Rain' (1989). Each of these films features similar stylish dark and brooding visual surroundings. 'Blade Runner' immerses the viewer in an intense, claustrophobic atmosphere of tension, unease and menace which never lets up until the very end. The film will repay several viewings to understand the full and complex story, which goes something like this: in the future (well, the film says 2019...) it is possible to manufacture androids almost indistinguishable from humans. Banned on Earth, such androids (Replicants) are hunted down by agents known as Blade Runners. A group of six is loose, and it falls to Harrison Ford to track them down – which he does, falling for one of their kind in the process. A superb sci-fi film, highly recommended – 5/5 stars.

I suspect there will be 3 main groups of people interested in this film, sci-fi fanatics (know the plot seen the other versions), those who know blade runner is a classic and wanted to see what the fuss was about, and those who saw it was highly rated and thought it looked good. I am in the 2nd group and having read the other reviews would agree that it is a visual feast especially given its 1982 vintage. This justifies its place in the should see category. I was not blown away with the acting and didn't get drawn into the characters but as a ground breaking sci-fi it is up there with Alien.

So dark, not in the artistic sense ! - Blade Runner review by AS

Heard this was a great film, visually it was impressive and the music was very atmospheric. But the whole thing took place in the dark and rain......we gave it 45 minutes and then felt so depressed and longing for some light, we gave up. Neither of us cared about the characters or hat the ending was.

Ridley Scott's intelligent fusion of Philip K Dick and Metropolis is an all round triumph, visually, emotionally and intellectually. The sets and models are marvellous. But, as well as the superb visuals, there is a very moving human story.

sorry but how many times can a director 'play about' and make us watch a newwer version.

the first was ace, the voiceover version ??not good.

you expect more when they go to all this effort!

2 out of 14 members found this review helpful.

Be thankful that is is the 2 disc edition, for those who really wanted to experience everything Blade Runner, a five disc edition does exist! You can debate which version is the best, as there are subtle changes. The final cut allowed Ripley to go back and amend some of the errors/oversights of previous editions, thanks to advances in special effects. The window sequence for instance now looks superb. Blade Runner is a classic is many senses as it marked the high point of model techniques, nowadays everything is computer based. The documentary just confirms how much work and effort went into creating this inspiring and influential world. I should also highlight Dangerous Days, which is a film in itself. Watch it after the film, then return to another version of Blade Runner. It increases your appreciation of this classic tenfold.

Not to be missed - Blade Runner review by PM

I'm not into all the different versions of this film, I saw it at the cinema when it first came out, and wanted to see it again. This version is definitely not quite the same, but it has all the classic ingredients..the sparing dialogue, the mysterious plot development, and above all, for me, the staggeringly brilliant soundtrack by Vangelis, which created not only the mood of the film, but of a spirit of film making that still endures to this day.

Where are the different versions, Cinema Paradiso? - Blade Runner review by JF

Apparently there are 3 versions of this magnificent film:

Cinema Paradiso appears to only have the second. I would like to watch the third version.