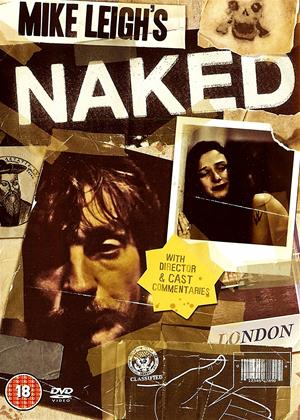 This is about a Mancunian Jossa Hughes, only Johnny is not just frustrated but deeply unpleasant and has no redeeming features. I don't think it is good film making to have losers in a desolate background going nowhere. The people Johnny meets are all losers and lead vacuous lives. This realism is not entertaining or thought provoking, it is just sad. I pity people whose lives are like this, but why should I want to watch them? The Hollywood formula of: hero meets heroine whose indifference turns to love while lots of lovable characters do interesting things in interesting places; is a winning one, which is boring because it is a cliché, but the opposite is not necessarily good.

State of the Nation. - Naked review by Steve

Of course there is no objective answer to the question of who produced the greatest performance in cinema, never mind in any particular year at the Oscars. But when the conversation takes place, the discussion has to include David Thewlis' literate, traumatised anti-hero in this brilliant stream of consciousness about urban alienation.

It is really an end of the world film, and a state of the nation vision by Mike Leigh about the collapse of society, provoked by the Thatcher revolution. And it is absolutely the London I remember from the period; of rootless, insecure outsiders.

Down from Manchester, Thewlis' Johnny roams the capital by night, spitting out a bitter apocalyptic commentary on a country and a world he sees as irrevocably damaged, and sliding into the end of days. A meeting with a nightwatchman who is guarding empty office space is stunningly scripted and acted.

There is humour, but it is very, very desolate, like a more pessimistic Catcher in the Rye. Mike Leigh again captures the time and the place forensically and prophetically, though like all his films, they hugely polarise the reaction.

Leigh has been doing the exact same thing since Abigail's Party - a well-off middle-class socialist like him living in a million pound house in north London cannot stand aspirational working class people who want to be middle class.

Here it's embarrassing and reverse classism really - the stereotype posh southerner predictably called Jeremy pitted against salt of the earth northern folk. Cartoon film really. Just imagine a film portraying a black character to tat level of stereotype. If the middle class were a race then Leigh would be a racist lol.

Deeply unpleasant, meandering and pointless film really and SO long and goes nowhere. Really - there is no plot or structure at all., It just meanders around aimlessly much like its characters - none of whom I'd want to know.

But this is one man's film - David Thewlis who steals every scene he is in with his sharp sarcastic sardonic dialogue, so an anti-hero of the underclass really. Watch him in the 3rd series of Fargo now to see him steal that too, and how he has aged!

If not for that tis would be 1 star max. I only watched it as I felt guilty I never head. Glad I did - but not in a good way, I got it out the way like a visit to the dentist. It's over now...