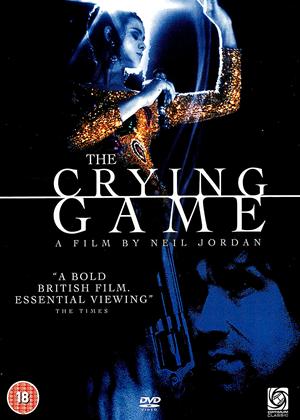 Reviews (2) of The Crying Game

Some brilliant acting notably by Miranda Richardson, Forest Whitaker was good but was not up to his usual brilliance, and some fairly dire performances too. There are twists that keep the plot going enough to be quite watchable.

Recommended - but it's not a film to watch with your granny :) - The Crying Game review by RP

Not sure what genre this film falls into: it's a sort of cross between a sexual / psychological / terrorist / thriller story. It's a tale of two halves. In the first half, the story goes like this: during the Troubles in N Ireland, a British soldier in civvies (Jody, played by Forest Whitaker managing a half decent Brit accent) is picked up at a fairground and lured away by a blonde girl (Jude, played by Miranda Richardson). He is kidnapped by the IRA and held hostage, guarded by Fergus (very well played by Stephen Rea) who strike up a sort of friendship. Jody knows he will be killed and asks Fergus to 'look after' his girlfriend Dil (well played by Jaye Davidson), at home in London. The IRA's demands are not met and Fergus is assigned to execute Jody. In the second half, Fergus has travelled to England to escape his IRA ex-colleagues and is working on a building site under the name of Jimmy. He looks up Jody's girl Dil and falls for her, but all is not what it seems. And at the end, the IRA come looking for Fergus/Jimmy to get him to do one last job...

The film won an Oscar for Best Screenplay and was nominated for several other awards. The character of Jimmy/Fergus is key to the film, and apart from the excellent screenplay (written by director Neil Jordan) it is the acting of Stephen Rea which is central to the film's success. I enjoyed it, but it's not a film to watch with your granny :) Recommended – 4/5 stars.