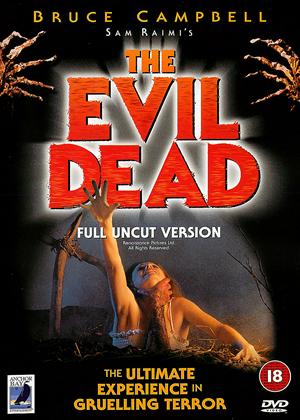 Reviews (2) of The Evil Dead

i first watched this film as a youngster and it scared the living day lights out of me. now as im older i thought it wouldnt have the same effect. even though there is some parts in the film that are a bit silly and your left thinking why would they do that, it still is one of the scariest films ive seen. DONT watch it on your own, but DO watch it

I've recently seen the super-gory 2013 remake so I thought watching the original was in order.

It's a low budget film (IMDB estimates $375,000) directed by Sam Raimi who went on to greater things with further 'Evil Dead' films and the 'Spider-Man' trilogy as well as scriptwriting and producing.

Five friends go off to a cabin in the woods where they find a mysterious book, an incantation from which causes demonic possession. The friends turn into zombie-like killers and there is assorted violence, mayhem and slaughter. Err, that's it.

Way back in 1981 there was no CGI or digital effects, so the effects in the film are somewhat clumsy by today's standards. But it's a classic of the genre and set the scene for many (all?) of the horror films made over the last 30 years.

Great stuff - and in many ways better than the 2013 remake, so I'll give it one more star just for that. 4/5 stars - but that is over-generous.