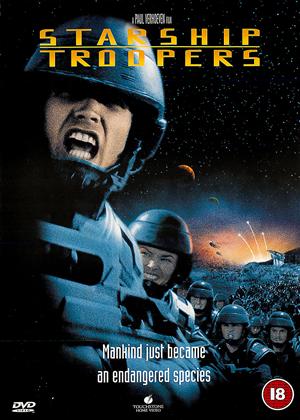 I have a few favourite sci-fi films which include 'Blade Runner', 'Alien' and 'Aliens' – and this one.

It's supposed to be based on Robert Heinlein's 1959 novel of the same name - and the name is about all it shares as the story has been more than a little changed; but that's certainly not unusual for film adaptations.

So what do I like about it? Well, it's space fiction with proper alien monsters, 1950s style cheesy cardboard characters, lots of action / violence / blood and gore - and not a little irony and political messaging thrown in for good measure. It's set in a future totalitarian state where the masses require citizenship to be able to vote etc, but if you're rich enough then citizenship doesn't matter. But the way to get citizenship is through military service - and the poor bloody infantry get slaughtered in a war against nasty arachnid aliens, referred to as 'bugs'.

In many ways it's a classic war story: school days and friendship, boot camp and friendship, war, death and the loss of friends, victory and reunion. But the recruitment ads for the military are fascistic in tone and there is a subtext that the future is not at all a pleasant democratic place.

As an aside, unlike most similar films, 'home' is not smalltown USA but Buenos Aires, Argentina.

Yes it's cheesy, not everybody likes (or can even see) the irony, but I like it. And the action - when it starts - is relentless, as are the unending hordes of mean, nasty bugs.

Brilliant action sci-fi. But its also much much more - Starship Troopers review by JD

I re watched as recommended by a youtuber.

His reason was you watch it once when your young and enjoy the action and sci-fi. But think nothing more.

Then you watch it again, older with wiser eyes and its like a different film.

Indeed, not only is this still thoroughly enjoyable (and trounces almost any modern scifi) it also has wit and humour and clever political messaging (note i say clever, not the clumsy and irritating 'support who i say for or else' messages you get today)

It also completely avoids comparison with Aliens (the king of all action sci-fi). Where any other soldiers v aliens film would almost always copy from or just head down a path which would lead to comparison and a nasty defeat. This seems to skillfully set itself far enough apart to be incomparable.

Probably worthy of 5 stars, but as its not quiet up there with Robocop or Aliens i give it 4. But its a must see 4.