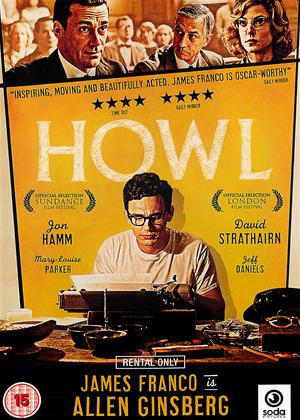 Allen Ginsberg is one of the Beat Generation’s stalwarts specifically in the poetry department. He was a celebrated poet, a controversial one for being openly gay and writing the explicitly-charged poem titled Howl that was published in 1955. In the film ‘Howl’, James Franco is Allen Ginsberg (another gay role after 2008’s ‘Milk’) and in it he flourishes as the author of the notorious poem so much so that poet-publisher-bookstore owner Lawrence Ferlinghetti was put to trial for unleashing it to the masses. ‘Howl’ explores the origins of the poem as well as the political and legal implications of a form of expression accused of obscenity.

In a way, ‘Howl’ is a threesome of films that are connected but are not seamlessly combined. To describe it in a nutshell, whether it’s a biopic or courtroom drama would be too restricting; at the same time, the scope of the film has been literally made small. With three segments put into place, the topics are orderly tackled but do not strike as a magnificent whole. The obscenity trial is about the poem but Allen Ginsberg is never in the premises. The arguments are valid and thought-provoking but can be especially daft since what are on trial are the contents of a poem and a man who just wants to share it to the public. Who polices what’s obscene? Who has power over creativity?

The film ‘Howl’ is directed by veteran documentary directors Rob Epstein and Jeffrey Friedman and they present it in three styles: black and white flashbacks with James Franco as a young Allen Ginsberg, a court room drama between opposing lawyers, Mad Men’s Jon Hamm and David Strathairn, and animation interpreting the title poem. Of all three depictions, the most effective and riveting is the 1957 obscenity trial, with James Franco’s Allen Ginsberg a strong second. The animation is based on Europe’s old-school style and can be a trip in itself. But a poem can be subject to many interpretations depending on the person reading it, to which this in essence, is a tad unnecessary.