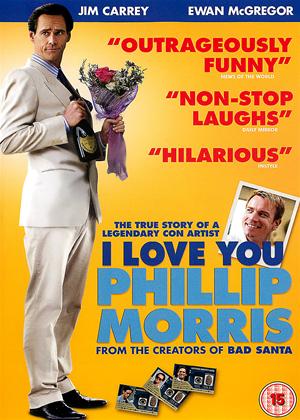 Rent other films like I Love You Phillip Morris

Reviews (4) of I Love You Phillip Morris

Hilarious Comedy - I Love You Phillip Morris review by PV

I thought this was a great comedy! Well written, good characterisation, good acting. I laughed several times - and that doesn't usually happen when I watch Hollywood 'comedies'.

It's also based on a book (good sign) and is actually farily intelligent - which is really unusual for Hollywood comedies these days.

I suppose it's for the US market and some people will consider it controversial and outrageous and offensive because it's about a gay couple; the Americans are puritans, so may have an issue. Personally, I find stupidity of the average dumb Hollywood 'comedy' infinitely more offensive!

The laughs mainly come from the fast pace, the bright script and the final twist.; but for me tha biggest laughs come from all the scams! It's a bit like a gay, 21st century Paper Moon.

Comedy? - I Love You Phillip Morris review by Pete W

I've come to the conclusion that I must be allergic to Jim Carrey as I don't find him either funny or a good actor. In fact, Ewan McGregor acts him off the screen in this one and is much more convincing as a gay man. The film would have worked much better as a drama about a con artist - it doesn't need Carrey's constant gurning. Anyone expecting a laugh a minute comedy, as advertised in the blurb, is going to be disappointed.

Disappointed - I Love You Phillip Morris review by CP Customer

Maybe I have a short attention span but after 15 minutes I gave up.

"Outrageously Funny" "Hilarious" Whoever wrote that must have been smoking some very odd cigarettes. The descriptive word which leaps to my mind is puerile.

Misleading trailer - I Love You Phillip Morris review by JD

How often have I seen a film after the trailer and feel misled? (Rhetorical).

The trailer showed a typically Carey-like, slap-stick slip on vegetable oil with the hint that he was a no good fraudster. It is in fact more complex than this, but more importantly not in the same genre. I was shocked that it was about Jim Carey's character discovering he was homosexual. There are then scenes of homosexual sex and the main theme is then gay love. The humour is therefore far from slap-stick; much more subtle and arising from this context, not from slipping on a floor. I think a 15 certificate is a bit light. I would not agree with "non-stop laughs" or "hilarious" but would agree with "outrageously funny".