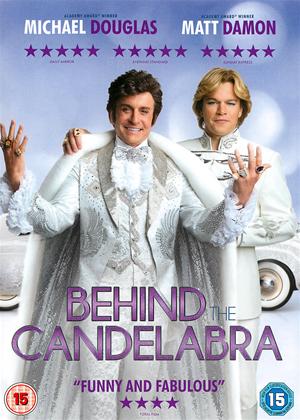 Reviews (3) of Behind the Candelabra

Much better than expected! - Behind the Candelabra review by JL

My recollection is that this film was badly mauled by critics and was not shown widely in cinemas so I was expecting very little.

However it is not a bad movie at all with fine performances from Douglas and Damon and eye catching cameo from Rob Lowe as a brilliant but somewhat dubious cosmetic surgeon.

I was never a fan of Liberace, although to my surprise I once saw him window shopping in Chester back in the very early sixties. He was appearing in Liverpool at the time. It was at the time Sunday closing so there was hardly anyone about.

Recommended if you remember just how famous Liberace once was!

Not my cup of tea - Behind the Candelabra review by MD

I was hoping to see more of Liberace performing. Instead there was too much of his private life. I found his voice and manner quite irritating after a while. I am afraid I gave up half way through.

This guy wasn't just gay, he was deliriously happy - most of the time. Liberace had a tough childhood plus the trauma of losing all his hair through illness at an early age - thus the wigs as flamboyant as the clothes - but he also possessed a wagonload of talent and twice as much ambition, a combination which would make him the world's highest-paid entertainer from the 1950s to 70s. This is a movie about the man, not so much about the music. Michael Douglas doesn't simply imitate the entertainer, he totally inhabits the character, he becomes Liberace; he would almost certainly have taken the Oscar that year, but, unfortunately, all the major distributors thought the movie 'too gay', so it went via HBO and thus wasn't eligible for the gold figurine. On release, however, the crital acclaim was virtually universal and Douglas received the Emmy. If a close personal story about a gay piano player is not your cup of tea, this isn't for you. But if you want to learn something about the legend of 'the man behind the candelabra' this is essential viewing.

Behind the Candelabra review by Alyse Garner - Cinema Paradiso

Love is complicated. Love with Liberace (Michael Douglas) however seems almost impossible. Behind the Candelabra looks at the different ways we see relationships and the horrible things we force upon those we care about in the name of deepening that bond. Liberace takes and takes until the only option is for whomever he is with to leave.

Following the relationship between Liberace and Scott Thorsen (Matt Damon), a polite, animal loving gay man who one night is introduced to the piano maestro and convinced to come work for him. Their relationship changes but when Liberace asks for too much and leads Scott down a road of drugs, surgery and extreme dieting the couple begin a relationship of manipulation and deceit, all in the name of love.

Damon leads the production and his Thorsen is a charming, naive and most of all likable soul whose fixation with Liberace cost him more than he bargained for. Douglas brings flair and sickly sweet smarm to his portrayal of Liberace, an intensely charming presence but one who constantly monitors the way he is seen, a man so consumed by his reputation that he fails to see the things in front of him.

Intent on telling its story with care and attention, director Steven Soderbergh fails to add any tension or pace to this tale of passion. The film is beautifully shot and framed with the cinematography effectively hiding the small budget but its attention to detail doesn’t make the film anymore dramatic or exciting. There is no other way to say it, it’s a glacial film.

The writing is equally impressive, the cast is spectacular with Rob Lowe being an interesting and wonderful choice for Liberace’s resident plastic surgeon but Soderbergh’s direction makes for a slow watch, a problem many of his films suffer from, although the attention to detail and the tale as a whole is impressive. Full of sparkle and life, Liberace is an interesting presence but one unable to excite for a whole picture.