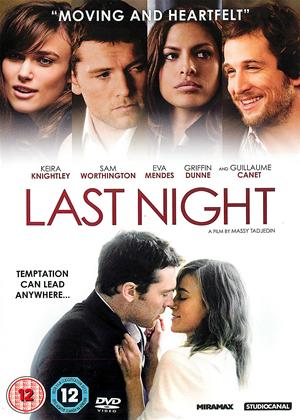 A film about trust - Last Night review by PT

This film is very well acted by the four leads. Knightley and Worthington, a relatively newly married couple love each other deeply. After attending a party together, Knightly becomes jealous and upset at her husbands obvious attraction for his new work colleague (Mendes).

Swearing to her that nothing is going on, Knightly is left to stew when her husband goes away on a business trip with Mendes. On her own in New York, an old flame appears, whom Knightly agrees to have dinner with.

Worthington and Mendes also end up having a drink together the night they are away. The film watches both and their concious struggles with infidelity or fidelity.

I know I will remember this film, which to me says it all.

Michael (Sam Worthington) and Joanna (Keira Knightley) are a young married couple living in New York; he works in real estate while she writes articles on fashion. During a party, Joanna intuits that Michael and his sexy colleague Laura (Eva Mendes) are attracted to each other. A row ensues when they return to their loft, Joanna accusing Michael that he wants to sleep with Laura. But before it even turns into a full-on fight, the couple arrives at a truce and sleeps it off.

The next day Michael leaves for a business trip with Laura, leaving Joanna in the city where she bumps into her former flame, Alex. They agree to meet for dinner and somehow, sparks ensue. Infidelity looms above the heads of Michael and Joanna. Will they partake in cheating or won’t they?

The main characters in the debut film ‘Last Night’ of director Massy Tadjedin are in a flux. Michael and Joanna are having doubts whether they got married too young and even have been together too long (they dated years before marrying). Do they still want to stay with each other if they’re attracted to other people? And should they give in to temptation if one can keep said indiscretion?

Is there still value in monogamy these days? ‘Last Night’ is a talky film and could be a tad overwhelming for those who are anticipating more. Most issues will pop in conversation and it’s up to the love square of Sam Worthington, Keira Knightley, Eva Mendes, and Giullame Canet to provide the subtleties and make us read between the lines.

Its cast is impeccably dressed and dapper and they wander photogenic sets and locations. Sometimes it makes you wonder if you’re watching a ‘real’ film or one of those fashion advertorial shorts that are released as viral videos. It is quite a kismet to have four attractive people’s fates to align and well, put in a dilemma to sleep or to sleep not with each other.