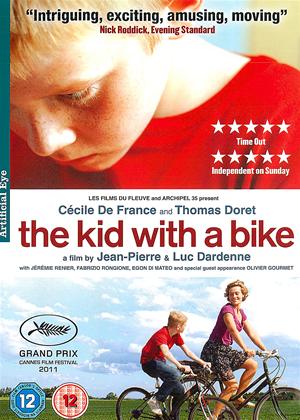 Rent other films like The Kid with a Bike

Reviews (8) of The Kid with a Bike

I loved this film, despite not usually liking family dramas of kitchen-sink-style misery memoirs. Its story, characters, acting, direction were all superb - spot-on - and the well-written part of the boy loyal to a father who is uninterested in him struck true. The music too is great.

In essence, this was a modern fairytale - with its darknesses, villains, heroes, and a boy negotiating them all: like Oliver Twist or Pip.

I could watch this film again right now - it's an enjoyable and intelligent drama, which explores the morality of family loyalty. The ending sort of fizzles out a bit, and one does have to suspend disbelief then and occasionally, but no matter: a clear 5 star winner! From Belgium too.

A troubled child. - The Kid with a Bike review by RhysH

A very touching story from the Dardenne brothers' catalogue. Cyril a young boy in care searches for his father and his bike, he finds them both but only manages to hold on to one of them.

Cyril is played by Thomas Doret,, a stunning performance, he exudes despair and misery with his whole body. He runs and runs to get away from people to get away from everything, his bike just helps him move away more quickly. The first time he smiles is a revelation, a hint of a brighter future.

Cécile de France as Samantha, who becomes Cyril's foster parent give a beautiful, understated performance, there is a back story here that is not revealed.

The ending is ambiguous but after the smile we have some hope.

Heavy viewing - The Kid with a Bike review by Swambi

This film had a "dogme" feel, as if the actors were making up the script as they went along. It is very simply filmed, concentrating on interactions between 3 main characters, but still failed to develop their character, or give a good understanding of their past or future - although it is somewhat redeemed by a few lighter moments towards the end.

Personally I never felt convinced or involved, and most of the story is depressing. Cyril is unremittingly troubled for most of the film, his father unremittingly hard-hearted (although we never gain any idea why) and Samantha incredibly good and patient at all times. As this pattern basically repeats itself with little change, the behaviour of Cyril can soon become boring and aggravating.

The Directors then attempt to liven the story up with some crime and action, but this is frustrating because it is overplayed and unbelievable, particularly with virtually miraculous effects undertaken by Cyril. This left me feeling that the Directors were abusing credibility to manipulate the feeling of the viewers.

Moving powerful film - The Kid with a Bike review by NG

Moving film about a child trying to find love and trust in the world that has disappointed him so far.

Good plot - The Kid with a Bike review by JD

The weak point is the boy's acting. There are even a few smirks at inappropriate (for the plot) moments which I thought should have been edited out. Apart from that brilliant. The poignant unreciprocated love the boy has for his father. The unreciprocated love the foster mother has for her charge and the adoration of the boy for an older boy who uses his trust for criminal gain. All much under-explored but important emotions. The acting of the boy's father and foster mother is wonderful and more than make up for the deficiencies.

I found this a moving film. The growing realisation of the boy that his well-being is in the acceptance of the hairdressers love, not with criminal teenagers, gives the film its core unity, and we are shown clearly the kinds of issues a child abandoned by his guardian (the father)

has to face. The neighbourhood where most of the action takes place becomes familiar so giving a richer sense of the significance of events. As for the boy playing the main role, I found his performance very convincing, so I didn't consider him to be a weak link at all. Yet another interesting Belgian film on childhood I have enjoyed: the other was Ma Vie en Rose, about a transexual boy growing up in France.

Really quite pathetic. Very simple story, could have been acceptable as a half hour TV program, but lots of unnecessarily long drawn out sequences, to make up for time?

A little disappointing - The Kid with a Bike review by CH

I found this film a little disappointing considering the great reviews it has received. It just didn't really cover any new ground for me. The subject matter has been well-explored by numerous high quality British films and TV series already. An admirable performance by Thomas Doret though.

Cyril has been left in a children’s home and he is sad and lonely, longing for his father who had abandoned him. He runs out of the home and returns to the apartment where they lived, but his father is nowhere, including the bike gifted to him. When Cyril does get his bike back, thanks to kind-hearted hairdresser Samantha, he’s on a mission to search for his father and make him take him back. If only. From director-siblings Jean-Pierre and Luc Dardenne (‘L’Enfant’), ‘The Kid With A Bike’ is an emotional ride – pardon the pun – in the vein of the classic film ‘Bicycle Thieves’.

The Dardennes are not afraid of eliciting emotions from its audience and ‘The Kid With A Bike’ highlights the highs and lows of Cyril’s (newcomer Thomas Doret) affections, especially in wanting to be loved by his father. As the 11-year-old titular character, he is full of energy and enthusiasm, even when there seems to be no hope of being taken back by a deadbeat father (Jeremie Renier, a Dardenne regular) while Seraing, Belgium’s underworld criminals are more than willing to take Cyril in.

A saving grace is Samantha (Cecile de France), a single woman who has no reason to take care of a child but has too much kindness inside of her not to do so. She seems to be a potential foster parent to Cyril but will she follow through?

Abandonment has been tackled on film many times before and it’s a powerful thing, oftentimes making a dent in anyone’s life. Now imagine having to experience that as a child. Cyril doesn’t understand that he has been abandoned by his father; he believes his stint at the children’s home is only temporary. Believing his father to abandon him will mean he never loved him in the first place. Crushing to say the least. And Cyril’s only connection to him is a bike. It’s his current best friend, his stronghold, the symbol of him being loved. ‘The Kid With A Bike’ will make you cry and not for the wrong reasons. Go ahead and just weep.