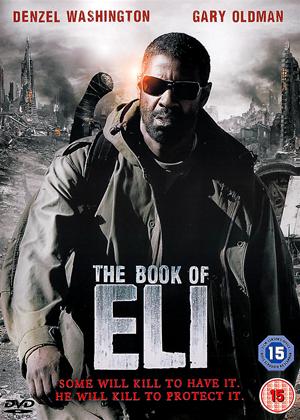 Synopsis:
Eli walks alone in post-apocalyptic America. He heads west along the highway of Death on a mission he doesn't fully understand but knows he must complete. In his backpack is the last copy of a book that could become the wellspring of a revived society. Or in the wrong hands, the hammer of a despot Denzel Washington is Eli, who keeps his blade sharp and his survival instincts sharper as his quest thrusts him into a savage wasteland... and into explosive conflict with a resourceful warlord (Gary Oldman) set on possessing the book.11 We walk by faith, not by sight," quotes Eli. Under the taut direction of the Hughes Brothers {From Hell), those words hit home with unexpected meaning and power.
Actors:
Denzel Washington, Mila Kunis, Ray Stevenson, Gary Oldman, Jennifer Beals, Evan Jones, Joe Pingue, Frances De La Tour, Michael Gambon, Tom Waits, Chris Browning, Richard Cetrone, Lateef Crowder, Keith Splinter Davis, Don Thai Theerathada, Thom Williams, Lora Martinez-Cunningham, Scott Wilder, Heidi Pascoe, Jennifer Caputo
Directors:
Albert Hughes, Allen Hughes
Writers:
Gary Whitta
Studio:
Entertainment In Video
Genres:
Sci-Fi & Fantasy, Thrillers

Reviews (6) of The Book of Eli

Mad Max goes Religious USA of A style! - The Book of Eli review by CS

I have two split opinions on this film.

Firstly I feel that it is a blatant piece of Right wing American Christian propaganda. Preaching about the bible and how it can save the world. The storyline is so simple, a man carrying a book across the states and someone wants it, no guessing what the book is! There are also lots of quips about righteousness and how the Bible can change the world, but ironically some say it was the Bible that destroyed the world!

But secondly, the cinematography, direction, editing and overall acting are very well done. I love the use of colour and camera techniques in this film, it's almost very arty in a way. But on the other hand this is an all out action flick with lots of fighting and people being killed.

In essence this is Mad Max for the 22nd century, with very heavy religious overtones thrown in. If you remove all the religion, it is in fact a very good action film, but the religious overtones are so heavy and in your face, that I feel whilst this may have been a hit with the Christian movement in America, it could have flopped in Europe. If you cannot stand religious preaching give this a wide berth as it will irritate you immensely, but if you can stomach that, then it is well worth a watch just for the beautiful cinematography!

A Post-Apocalyptic Disaster !!!!!!!! - The Book of Eli review by dirtypotatoes

The wafer thin plot can't hide the fact this is a right wing Christian remake of Mad Max. The religious NUTCASE known as Mel Gibson will be very proud.

Strange plot to start with where a very unusual context is not explained initially. Having worked out where, when, how the plot then trickles along. Lots of fighting in which 1 beats 10. An amusing scene in which a house is shot to bits (not a novel trick) and a small but unexpected twist at the end is not enough to leave you dazzelled. Denzel is good of course and well casted to the character. The plot let him down.