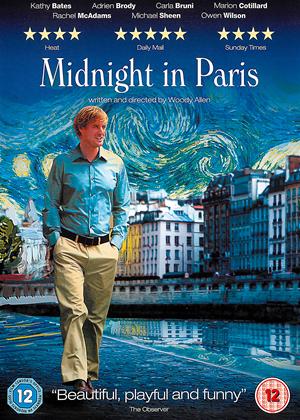 Reviews (6) of Midnight in Paris

Set in Paris, a gently funny and charming film which contrasts the Woody Allen type character's love of Paris, culture and the past with his fiancée's shallowness and love of the present, using his sudden ability for time travel to make the point. It's an obvious plot line but beautifully done, with Paris portrayed at it's most romantic!

Of the bad Woody Allen films out there, this is one of the best. At least it isn't about some old man having a relationship with a pretty young lady many years his junior. Why oh why does he caricature every person though? Why does he insist on hand holding you through the whole thing with overacting and overt set ups. Most of all, why do I keep watching every Woody Allen film despite their increasing embarassing flaws? Overall, I enjoyed it!

Charming and imaginative - Midnight in Paris review by AW

Very pleasantly surprised with this charming, funny and amusing tale of a struggling writer who magics himself back in time to the era of his dreams. Put together with imagination and how pleasant to watch something a little different. Well done!

A budding author holidays in contemporary Paris with his Fiancé and her parents. On his own one night walking the streets he is enticed into an antique car by champagne revellers. Later he is taken to an apparent 20's theme party; but no, he is in the 1920s where he meets artists that populated the city at that time. Will he stay? Will he abandon his present for an alternative life rubbing shoulders with his heroes? Romantic and heart warming it is Allen at his best; he isn't in the film but the lead male character has his dialogue and Allen lives vicariously through the imagined character. Intelligent and amusing it is a refreshing reminder of what films can be with some effort!

Enchanting? We found it dull! - Midnight in Paris review by DH

Lots of people have said how enchanting this movie is. We found it ploddy, predictable and dull. We pre-empted the entire plot through to the inevitable conclusion. Yes Paris is pretty but it does not make a film. The speeches you can hear Woody Allens voice and his delivery in Owens performance. None of the characters are developed.

If you want mindless, light and frothy then this will do you. It felt like a rip off of Goodnight Sweetheart with Nicholas Lyndhurst just using a different time.

After many years of dreaming of Paris, Woody's characters finally arrive. A city where poets will dream, the academics will pontificate and the cynics will be hostile. This is magic realism, and a companion to The Purple Rose of Cairo. Owen Wilson (Gil) is a screenwriter who has just written his debut novel. He loves the city and in particular its image in the 1920s when it was host to American writers and the great artists of Europe.

Shunned by his materialistic fiancée and her rich, conservative parents Gil dreams so intensely of his golden age that he finds a portal back to that time, and meets Hemingway, Scott and Zelda Fitzerald and Picasso (etc). He gives his novel to Gertrude Stein. He explains his predicament to surrealists Dali and Man Ray.  And he falls in love with Picasso's model/lover, Adriana, played by Marion Cotillard, who herself dreams of La Belle Époque and Paul Gaughin and Toulouse-Lautrec, who in turn revere the Renaissance.

It's a nostalgic film about the nature of nostalgia. It is an optimistic film spilling over with the joy of life. We fall in love with the magic of the film just as Gil adores his idealised image of the past. The legends of the twenties are cast to perfection, with Corey Stoll standing out as Hemingway, and Cotillard delightful as Adriana (an invented character).

Paris is as drop dead beautiful here as New York was magnificent in Manhattan. It's such a spectacular looking film (photographed by Darius Khondji). The opening is superb. It's very long montage of Paris which is more than touristic; it tells us, that this place is magical and to prepare for extraordinary things to happen. Woody's best film of this century.

From world renowned neurotic and cult director Woody Allen comes the film that has quickly become the most commercially successful of his entire career, Midnight in Paris. The movie stars Owen Wilson and Rachel McAdams as a couple, engaged to be married, who take a trip, with her parents, to Paris.

Wilson plays Gil, a cranky screen writer whose experience of Hollywood is making him disillusioned and apathetic, however an interest in 1920’s Paris and a strange incident with a vintage car find Wilson thrown back into the past and a guest at a fabulous high class party where he meets F Scott Fitzgerald, Ernest Hemingway and Cole Porter and falls in love with Picasso’s mistress. Wilson returns to his past Parisian dream every night, leaving his fiancé behind after a failed attempt to bring her with him. As Wilson’s appreciation for the 1920’s grows the divide between McAdams and him stretches.

This is a movie about nostalgia, which seems a very potent subject with current fashion traits and Allen’s poor performance since his cinematic heyday; yet it ends with a conflicting message about enjoying the presence for what it can offer, rather than – literally – living in the past.

The movie is surprisingly enchanting, Wilson is excellent and I note that he grows on me with every film he makes, whilst the 1920’s setting is simply fabulous. Beyond this there is enough comedy to keep the plot afloat throughout, without distracting too much from the nostalgic charm of the piece as a whole.

For what it is, which ultimately is a romantic comedy, Midnight in Paris is classy and adult, and a genuine pleasure to watch.