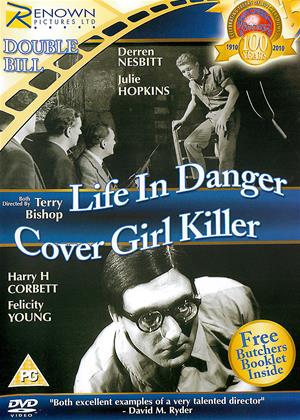 Rent other films like Life in Danger / Cover Girl Killer

Sign up
Hammer the Toff / Mrs. Pym of Scotland Yard

Sign up
The Best of British B Movies: Vol.2

One O.K. The Other Great. - Life in Danger / Cover Girl Killer review by NC

Two B films, one adequate, the other a heck of a lot more than that.

To start with the lesser, 'Cover Girl Killer' has Harry H. Corbett as a psychopath knocking off pin-up girls in the name of purity. Nothing much is made of this as most of the story revolves around the run-of-the-mill police investigation rather than the mind of the murderer.

Interesting for its time - the age of X certificates, bawdy shows and top-shelf magazines. Try to hide everything like this from minors and the innocent, but don't try too hard - after all there's good money to be had. Unfortunately it's a film where all what could have been is underexplored. The finale isn't worth waiting for.

Corbett is quite good. The rest of the cast just go through the motions.

'Life In Danger', however, is on a different level entirely. There has been an escape from the local asylum. A stranger appears in the village seeking shelter. To describe more gives the game away. Suffice to say this is a superbly aimed arrow at the much deserved target of small-minded, Empire-proud, slow to think quick to act, shoot anything that moves mentality.

There are shades of the wonderful 'Whistle Down The Wind' here, and its a mark of how good 'Life In Danger' is that it doesn't suffer from the comparison.

An impressive cast, including Richard Pearson. Carmel McSharry and Howard Marion-Crawford are on top form. Julie Hopkins may be little known but, on the basis of this performance, should have been a much bigger name. Derren Nesbitt plays the wary, exhausted stranger perfectly. This is a real find.