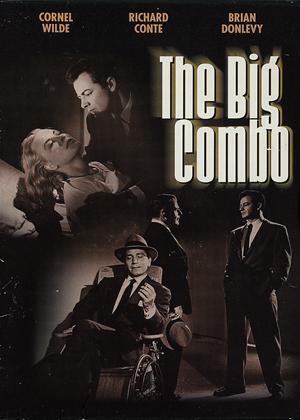 Reviews (1) of The Big Combo

The Big Combo is a face off between Cornel Wilde as homicide lieutenant Leonard Diamond, and Richard Conte as sociopathic mob boss 'Mr Brown'.  Near the beginning of the film, Brown defines high achievers as being those most able to hate, as they will be willing to destroy others to achieve their goals, and there is an obvious equivalence intended with Diamond who will adopt any means to take the crime kingpin down.

He will even sacrifice Brown's girlfriend who Diamond claims to be in love with, the traumatised Susan, (Jean Wallace). She is a cultivated, educated woman in an environment where those accomplishments have no value. Hate rules all. Brown's deputy is played by Brian Donlevy as a traumatised punch bag who just can't take it anymore. Or dish it out. Empathy is his tragic flaw. His demise, shot in silence when Conte removes Donlevy's hearing aid is a classic noir scene: 'I'm gonna give you a break. I'm gonna fix it, so you don't hear the bullets'.

This is is a beautiful expressionist film shot by genre legend John Alton. The Big Combo is visually great art with incredible extreme close ups, and although in widescreen, with complex depth of field, and evocatively lit.

There is a tough, ominous, imaginative original screenplay from Philip Yordan which is also sad, and tender at times- as when Diamond laments his murdered stripper girlfriend: 'she came to see me in her best shoes... I treated her like a pair of gloves. If I was cold, I called her up'. As with other films of the mid-fifties, there is an perception of the straitjacket of censorship being eased. The murders are violent and onscreen, The homosexuality of a couple of Brown's heavies isn't overt, but isn't made cryptic either. Shame that in a couple of years, director Joseph H. Lewis moved onto TV westerns. He was still at his considerable peak.