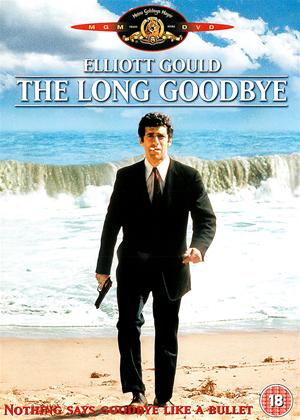 Reviews (2) of The Long Goodbye

In many ways this is an excellent movie. The supporting cast are excellent, notably Sterling Hayden as a totally out of control alcoholic writer obviously based on Ernest Hemingway. The screenplay, which was, amazingly, written by the lady who co-wrote "The Big Sleep" starring Humphrey Bogart in 1946, removes some unlikely and unnecessary subplots and provides a far better ending than the one in the book. Robert Altman shows his usual mastery of cinema. Even the running gag about all the music in the film being different arrangements of the title song works splendidly. This should be the ultimate Raymond Chandler film.

The problem is Elliot Gould. It's not that he gives a bad performance. It's just that if you're familiar with Philip Marlowe, the character he's supposed to be playing, which most viewers will be, the hero of this movies comes across as a grotesque parody. I strongly suspect the Coen brothers were inspired by this film to make "The Big Lebowski", in which Chandler homages and tropes pop up constantly, but the central character isn't supposed to be Philip Marlowe; he's just a dim-witted easy-going slob who somehow gets dragged into a Chandleresque situation.

Gould's Marlowe is Jeff Lebowski's slightly smarter older brother. At times his apparent stupidity is revealed to be an act when he does something unexpectedly clever, but these moments occur far too seldom. Mostly he seems genuinely thick and a little unbalanced, constantly mumbling repetitive nonsense even when he's alone, especially his mantra "it's all right with me", which seems to apply to every situation in which nothing bad is happening to him right now. And although he does display occasional flashes of intelligence, much of what happens doesn't require him to do anything at all, especially the convoluted subplot involving a completely psychotic gangster, in which the actions of third parties cause Marlowe to passively drift into and then out of extreme danger while he stands there looking and sounding stupid.

This film would work far better if, like "The Big Lebowski", Gould's character wasn't supposed to be Philip Marlowe, but a completely unconnected person trying to do Marlowe's job without having the slightest aptitude for it. If you've never read any of Raymond Chandler's books or seen any of the other screen versions of them, you'll have no problems with the peculiar characterisation of the hero. But if you know what this extremely famous fictional private eye is supposed to be like, it'll be the equivalent of a movie in which Sherlock Holmes is portrayed as a borderline moron with autism and played by Billy Bob Thornton. Which is a pity, because it's an excellent movie thrown out of kilter by its inexplicably bizarre treatment of a character almost all of its target audience would have expected to be portrayed completely differently. Oh, and in case you're interested, Arnold Schwarzenegger has a walk-on part and takes his shirt off.

Gould is Outstanding - The Long Goodbye review by KJ

Eliot Gould makes this film: Excellent performance as Marlow. Story can get a bit confusing but the star is Gould who makes watching this fine film very entertaining and enjoyable. Also watch out for a brief appearance of Big Arnold Schwarzenegger as one of the thugs!!! Highly reccommended.