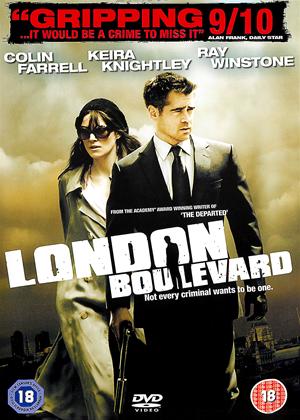 After about 20 minutes of watching Colin Firth in the role as Mitchell I couldn't help but wonder how Michael Caine of Get Carter fame would have played the part. I suspect that within that time you would have developed an affinity with the character, something that was still lacking 60 minutes later when I began to fast forward. David Thewlis who played someone called Jordon (didn't work out who he was supposed to be) was the only interest in an otherwise extremely dull movie with a incredibly weak plot that also happened to be extremely confusing.

You'll either love it or hate it - me, I liked it - London Boulevard review by RP

This film tells the story of hard man Harry Mitchel (played by Colin Farrell) from his release from Pentonville prison where he's served 3 years for GBH, through his rejection of a job with London gangster / money lender Gant (Ray Winstone), his acceptance of a job as handyman–cum-bodyguard-cum-companion to depressed actress Charlotte (Kiera Knightley), to his eventual demise.

Excellent cast, stylish photography and locations, violence, plenty of f-ing and blinding, superb musical score. So, yet another strong Brit gangster film? Well, not quite... I think it's one of those films you either love or hate. Personally, I liked it very much – but it could have been better.

The violence is largely off-screen. There are a couple of sub-plots (one of which leads to Mitchel's death) but no real surprises. I thought the South London / Kennington / Holland Park settings worked well and I recognised many of the character types as being authentic (yes, I have lived there). I don't think Kiera Knightley – big name actress though she is – had quite the on-screen presence to be convincing and was pretty limp, and Ray Winstone seems to be descending into a caricature of himself. Colin Farrell was convincing but had few words to say (probably just as well as his sarf London accent was a bit suspect).

But these are minor criticisms – as I said, I liked it. Others maybe won't. It's certainly worth 4/5 stars from me.