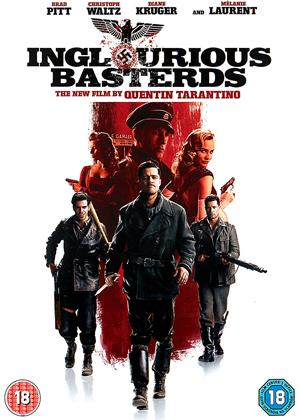 'Inglorious Basterds' is a deceptive film, though the film is promoted as a story about a small unit of Jewish-American soldiers who use guerrilla tactics to ambush Nazi platoons and brutally massacre them leaving one sole survivor to tell the tale, the film is actually two separate stories which come together at the end. The 'Basterds' storyline sadly only makes up roughly a third of the film, the other two thirds revolve around the character of 'Shosanna' a young Jewish woman who escapes the mass execution of her family by an SS officer named Colonel Landa. While the storyline is pretty good the film as a whole is spoiled by Tarantino's over direction and obsession for adding quirks for the sake of being quirky, a prime example are the opening titles which are in four completely different fonts. The dialogue is in three different languages, 'The Basterds' scenes of the film are in English while the dialogue in 'Shosannas' scenes are in French and German with English subtitles, and while I don't mind subtitles, the foreign language dialogue, (though relevant in the opening scene), seemed pointless in such a mainstream film and seemed more about Tarantino showing off about directing scenes in French and German. Another problem is the inconsistent cast, the foreign language cast of French actress Mélanie Laurent, German actress Diane Kruger, German Actor Daniel Brühl and Austrian Christoph Waltz were all nothing short of superb, with Waltz's portrayal of Hans Landa the highlight of the film. The English speaking cast on the other hand were a real let down especially the usually fine Brad Pitt as the U.S officer Lieutenant Aldo Raine who spends most scenes looking dumb and pulling faces. But what completely spoiled the film for me were the final scenes. World war two was a historical event; there any many WWII fictional films which are based within the limitations of historical events, but without spoiling the film Tarantino creates a fictitious ending which completely rewrites history. And while most rational people will see 'Inglorious Basterds' as a work of fiction there already are plenty of posts on forums and community blogs from many people asking if it was a true story and is that how the war ended? Tarantino doesn't do himself any favours to rectify the film is a work of fantasy by stating in the end credits 'Based on actual events'. Overall, though touted by many as a return to form for Tarantino the film is a fairly decent effort, maybe on a par with 'Jackie Brown', but certainly not as bad as 'Deathproof'. I would have given it three stars but it gets two for the idiotic ending.

Very, very disappointing. End of. I did write quite a long review for this film but I scrapped it on the grounds that enough time has been wasted with this effort as it is. If you're really stuck then watch it. Otherwise get Axis of War out instead

I was only obeying orders! - Inglourious Basterds review by CP Customer

In my view typical Tarantino but not in the class of Pulp Fiction or Rservoir Dogs. Whilst the ending rewrites history I guess I was pleased and maybe this is how the war should have ended.

Brad Pitt give a good performance as Lieutenant Aldo Raine although his accent made me smile throughout. For me though the star is Christopher Walz and his 'baddy' character Colonel Hans Landa. I enjoyed it and if you don't take it too seriously you will too.

I can see the atraction for Brad to play his role but not Samuel L Jackson. This is the usual "Us Americans saved the world in WWII" crap, until the last few minutes (if you can be bothered to sit through it that long) and then it all goes wrong for them except they have a get out clause at the end where good old Uncle Sam makes @em pay in the end.

Its Resevoir Dogs and Kill Bill meet the Nazis and not in a good way.

Rather lacking from Tarantino. He is one of my favourite directors but this is poor.

World War 2 was a matter of life and death to many people and not a bloody pantomime!

This film is an insult not only to the allied forces in Europe but also to many of the Germans.

Unfortunately, I would not be surprised should many credulous viewers actually believe this to be part of our history.

This is a dire movie, even by QT's plummeting standards. Silly, badly written (repetitive dialogue; dialogue that is clearly Tarantino's voice spoken by several characters, so not differentiation). Ridiculous rewriting of history (why?) for no purpose. Silly pantomime-ish hiss-boo portrayal of Nazis. Utterly absurd and deeply unenjoyable.

How this ever made money and got nominated for awards is beyond me. It is trash. No stars.

1 out of 9 members found this review helpful.

Tarantino’s decline continues with Inglorious Basterds, a film that is in dire need of trimming, a decent script and a steady hand. What we have here veers between comedy, drama and a thriller, with the latter representing the strongest aspect of the movie. It’s greatest moment is the opening period where we are first introduced to Colonel Hans Landa, marvellously portrayed by Christoph Waltz who is the real star of Inglorious Basterds. After this highpoint the film descends into farce and mockery, never managing to scale such heights again. Tarantino continues to annoy and frustrate as while this is an improvement on Death Proof, his childish script antics have ruined what should have been a knockout war movie.

Tarantino has always been a bit of an indulgent filmmaker to me. Script full of lengthy scenes filled with at least one 'speech-ifying', righteous characters that sound all a bit similar; sumptuous visuals; classic score; lengthy running times and at least a touch of unnecessary violence.

This film isn't a new take on things. It does look good, and sound great too -- the man certainly knows the craft. Most of the dialogue-heavy 'someone's going to be found out' scenes are at least led by a delightfully bonkers Christoph Waltz,

An OK effort, 30mins too long and still manages a rather pointless (if loud) denouement.

This is typical Tarantino, with a number of scenes of long involved dialogue, building tension towards often violent climaxes, which can be a bit gratuitous. If you appreciate that structure you won't mind that this film, as with his other recent output, is nearly two and a half hours long. Overall, I enjoyed it.