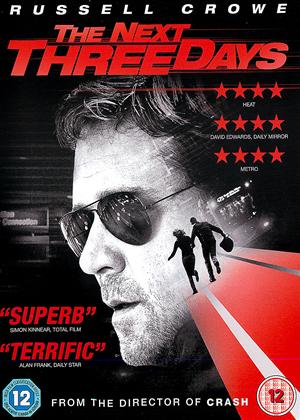 Reviews (3) of The Next Three Days

Utter rubbish - The Next Three Days review by CP Customer

I can not understand how this film has managed to get 4 out of 5 stars, a complete waste of my time to watch! ended up fast-forwarding after 30 mins to see if it got any better and unsuprisingly it did not!!

If you like Russell, you'll like the film. The story is quite tense and Russell gets duffed up a fair bit trying to get down to the criminal underbelly for the help he needs. Nice twist at the end.

What a very silly film with an unbelievable plot: the diabetic wife of teacher Russell Crowe is jailed for a crime she did not commit. Her appeal fails. Hero Crowe decides to organise her escape from jail and succeeds after selling his house, learning to use a bump key to open locked doors, learning to open car door locks with a tennis ball, being mugged when attempting to buy fake passports, robbing a drug dealer at gunpoint and rescuing his son from a zoo party. Russell Crowe plays Russell Crowe in a disappointingly silly film. You should also be aware that this is a remake of the (better) 2008 French film 'Anything For Her'. I rate this Russell Crowe vehicle at 2/5 stars - and for the record, I rated the French original at 3/5 stars.

The Next Three Days review by Alyse Garner - Cinema Paradiso

The Next Three Days is an American thriller staring Russell Crowe and Elizabeth Banks about a devoted wife and mother who is, to everyone’s utter surprise and horror, arrested for the murder of her boss. Her trial is over quickly as the evidence is stacked firmly against her and she is sentenced to a life imprisonment.

Crowe, a community college professor, is then left to raise their son alone, but when his wife’s appeal fails and his son begins to get bullied he realises what he must do, he must help is wife escape.

Unbeknownst to Banks Crowe enlists the help of an ex-con (Liam Neeson) who helps him plan what he must to ensure his wife’s freedom. The majority of the middle of the film is spent following Crowe as he attempts to gather fake passports and credit cards so that he, his son and his wife might flee the country. Eventually, and after a bout of violence and arson Crowe has acquired all that is needed to release Banks from prison.

The final quarter of the film follows the couple as they are chased through Pittsburgh by police. However Crowe has done his homework and put in place several decoys so that the police find themselves at the wrong place at crucial moments in the couples escape.

The film ends, predictably, with the family living free in South America. As this synopsis tells you the film is fairly predictable, and lacks the tension most expect from a thriller. However the question of Banks’ guilt is enough to keep one interested until the final credits, when you do eventually learn whether she is guilty or not.

This is not the most intriguing aspect of the movie however: whilst teaching Don Quixote Crowe asks his students whether it is better to live in ones own reality and be considered insane than exist in the real world and live in despair. This of course references his unflinching belief in his wife’s innocence and his desperate desire to reunite their family. However this issue isn’t really picked up again and the audience is treated to a somewhat-too-long guns and car chases movie disguising itself as a thriller.