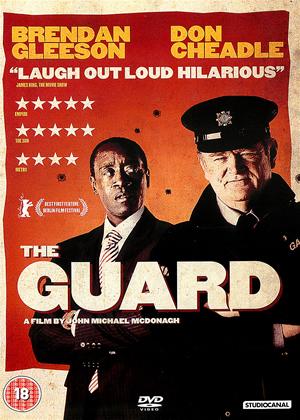 Reviews (4) of The Guard

Very funny film - The Guard review by AM

Well worth renting this out! I didn't think it was going to be as good.

The characters were brilliant in it. The film keeps you gripped with it being very funny at the same time,

I don't have any faults with it, I hope they make another film to follow it up.

Funny and absorbing - The Guard review by MG

Everything hinges on the central characater, who is brilliantly portrayed. If you like him (and I expect most people will), you will like the film. It is really a western, but set in Ireland - will the flawed sheriff retain his integrity and successfully take on the bad guys?

Excellent acting throughout and well directed, the film cashes in the "rural Ireland charm card" effectively.

Lots of laugh out loud moments, but also real threat and evil. A very good film.

Brendan is the man. - The Guard review by NC

Brendan does a good film. In Bruges, Its all about Harry, Gangs of New York etc. Is a big Irishman, with way with him. Good fun and good story.

This is an OK Irish film about a bent copper....bit of a rubbish ending to be honest and not really sure what the point of the movie was

‘The Guard’ is about, well, the guard played by Irish character actor Brendan Gleeson. As Sgt. Gerry Boyle, Gleeson is unafraid to be an impish man of the law. See, Boyle is responsible for the scenic coastal Connemara territory. But the idyllic location may be picturesque yet it’s a hub of criminality – drugs, booze, prostitutes – you name it, they’ve got it. And you know how Boyle keeps the peace? It’s because he’s at peace with the hooligans – in fact, he is one of them! With Boyle’s hedonistic approach at law enforcement, you may want to projectile vomit at him. But Boyle is unusually adorable… to the viewers, anyway.

When an American FBI agent (Don Cheadle) comes to town and he gets partnered up with Boyle, sparks don’t exactly fly. But they have to work together to catch the FBI’s most wanted hoodlums. An Irishman (who just happens to be racist) and a staunch African-American as partners? Yes, disaster waiting to happen is the understatement of the year.

As ‘The Guard’, actor Brendan Gleeson doesn’t have to try too hard to convince us he’s a major douchebag but at least he’s an honest major douchebag. He has always been awesome in every role he plays. He’s done everything – serious gangster flicks, zombie movies , even a fantasy film – and he doesn’t even miss a beat.

Don Cheadle on the other hand, is just equally as fascinating. A real dramatic actor with comedic movie credits as well, Cheadle can go toe to toe with Gleeson. You can say ‘The Guard’ is a buddy cop flick but don’t say it’s just another ‘Lethal Weapon’. At the helm is writer-director John Michael McDonagh, the brother of Martin McDonagh, whom Gleeson has worked wonderfully in the film ‘In Bruges’.

‘The Guard’ could be part of that crime film anthology, what with its spitfire writing and focus on lovable ruffians going about their business in the criminal underworld, no biggie.