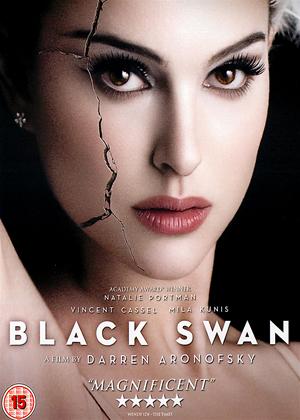 could been better - Black Swan review by CP Customer

very dissapointing going by the preview looked good but sroryline is dire and total stupid,and the ending one daftest i have seen

This definitely ain't no turkey - Black Swan review by PT

A superb film from Darren Aronofsky.

Natalle Portman's performance as Nina is outstanding, deservedly scooping her the Oscar for best actress that year.

Nina is an innocent, sweet girl, still at home with her over protective, domineering, deranged mother (brilliantly played by Barbara Hershey).

The director of the ballet ( Cassel) believes that Nina has what it takes to dance the white swan part of swan lake (this part fits with Nina's personality) but not the malevolent black swan.

Trying to get the character of the black swan sends Nina over the top, and the split personalities of the two dance parts begin to transcend into Nina's personal life.

The hand held camera work of Aronofsky lend credence to this mental breakdown.

The ending really blew me away, and I had to really think about it. Superb.

Black Swan is a psychological thriller directed by Darren Aronofsky. The movie follows Nina Sayers (played by Natalie Portman), a ballet dancer who lives with her overbearing mother. She wins the role of the swan queen in ‘Swan Lake’. However, she is now facing tensions from her new rival Lily and the company director Thomas. The events that follow describe the movie.

Similar to ‘The Wrestler’, Aronofsky’s prior movie, Black Swan was able to present the other side of a ballerina.

Though the film appears to be overcast with major stars, it is very much required. The film stars major actors like Natalie Portman, Vincent Cassel, and Mila Kunis etc. Portman has done a wonderful performance in a role that is more demanding on the physical level.

Cassel as the dance company director has played the role to perfection. His role has shades of grey which needs intense acting from an experienced person. All other supporting actors have done a nice job.

The music and dance sequences are quite good and engaging. However, the progress of the story can be predicted even in the early stages. Despite some minor flaws, Black Swan is an interesting movie to watch. In a nutshell, Black Swan is an intense thriller drama that could satisfy the target audience perfectly.