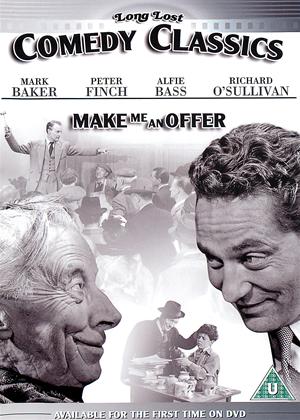 Synopsis:
Long Lost Comedy Classics is a collection of films from a golden age of British Cinema, remembered for timeless stars and come unique movies that have stood the test of time. So why not take a trip down memory lane and see how cinema used to be? A struggling antiques dealer (Peter Finch) thinks he has found the answer to his problems when he stumbles across a precious vase amid a range of other less desirable items. The trouble is, the owners of the vase are pretty shrewd themselves and are not keen on letting it go for a song meaning that our hapless chap has to pull out every trick in the book in order to win his prize.
Actors:
Peter Finch, Adrienne Corri, Rosalie Crutchley, Finlay Currie, Ernest Thesiger, Wilfrid Lawson, Anthony Nicholls, Guy Middleton, Alfie Bass, Vic Wise, Meier Tzelniker
Directors:
Cyril Frankel
Studio:
Slam Dunk
Genres:
British Films, Classics, Comedy
Countries:
UK

Reviews (1) of Make Me an Offer

Come to Dust - Make Me an Offer review by CH

Dead at sixty, Peter Finch had appeared in many films. If not enough of them are memorable, such high points as No Love for Johnnie and Sunday, Bloody Sunday make one look at others with some expectations. So it is with Make Me an Offer (1955), and here is, at most, a curiosity.

Directed with scant flair in variable, sometimes strangely bleached Eastmancolor by Cyril Frankel, who died recently at 95 after working mostly in television, it sprang from a play by Wolf Mankowitz whose film A Kid for Two Farthings appeared the same year. In his time, Mankowitz was well known for depictions of East-End life - and must always be esteemed for his work on The Day the Earth Caught Fire (1961) with Val Guest.

Here, though, is something whimsical - partly realistic, partly broad comedy – with forty-year-old Finch who spurned the chance to follow his father into life as a market trader but struggles to make a go of life in the perhaps more exalted calling of an antiques dealer. Turnover is never sufficient to buy his wife the fur coat she craves. All this was brought about by a childhood visit to the British Museum where he was transfixed by certain objects - and haunted by a newspaper report of some sculptures stolen and never recovered. Events now take him to a country-house auction. In a cottage on the land lives Sir John (Ernest Thesiger) who is visited in turn by various relations, such as the giggling gamine, Adrienne Corri. The plot is of the slightest (and involves a crucial dog), with the main interest being some ten minutes of the auction itself. That is, apart from Thesiger who never rises from the armchair in which he mostly slumbers noisily - and when he does awake, he is never able to utter articulate words. This is a brilliant performance, with a radiant moment when he smiles. It more than compensates for the implausible sight of Finch in an apron while wielding a feather duster.