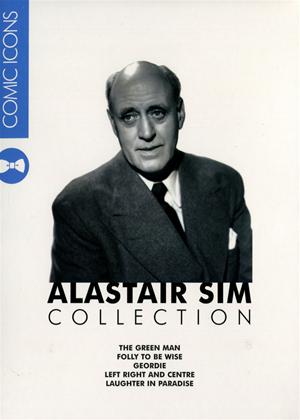 Sign up
Will Hay Collection: The Black Sheep of Whitehall

Reviews (3) of The Green Man

This delightful old-school British comedy is essentially a showcase for the unique talents of Alastair Sim, and it's worthy of five stars whenever the camera is following him rather than the rest of the cast, which fortunately applies to a large part of the movie. His amiably psychopathic hitman is billed (in his own words) as a strange kind of hero who only assassinates people who thoroughly deserve it, yet he's repeatedly show to be a hypocrite who doesn't care about collateral damage to innocent bystanders, is willing to casually dispose of anyone who gets in his way, and is doing it all for money. But it's the two-faced amorality of the character that makes him so funny and engaging. The long sequence where he plays chess with an unsuspecting policeman while getting rid of a dead body behind his back is treated exactly like a sitcom situation where the hapless protagonist has to simultaneously have dinner with two people who don't get on without them finding out about each other, except that instead of trying to avoid social embarrassment, the anti-hero is attempting to cover up a cold-blooded murder, and what worries him is the inconvenience of it all, not the fact that he's just killed somebody.

The scenes with George Cole as the world's worst vacuum cleaner salesman and Jill Adams as the pretty girl he inevitably falls for while thwarting the killer's plans more or less by accident haven't aged quite so well. The extremely contrived ways in which the two of them end up in apparently compromising situations, causing her pompous twit of a fiancé to assume she's in the habit of casually leaping into bed with door-to-door salesmen, are hopelessly old-fashioned in a nudge-nudge kind of way, the joke being that a woman is wrongly believed to be sexually active and therefore bad, but we know she isn't which takes the curse off it. The unashamedly sleazy occupants of the third-rate hotel the film is named after where the big finish takes place, most of whom really are there for dirty weekends with people they aren't married to, are far more fun, and I wish it had been them who blundered into the plot and became accidental heroes, rather than the quite likeable but not terribly interesting characters played by Cole and Adams. But in the end it's Alastair Sim who carries the entire movie, and he does it so well that I'd recommend this to anyone who doesn't have an irrational aversion to Alastair Sim.

NOTE: The 1990 BBC TV movie "The Green Man" starring Albert Finney, which is also available from this rental company, is not a remake of this film, but a completely unrelated supernatural thriller which happens to have the same title.

This is a very dated British film from about 1956 - more a curiosity piece than anything else.

Adapted from a pre-Look-Back0In-Anger stage play by its writers, it starts well - a little like the Alec Guinness movie KIND HEARTS AND CORONETS which is much superior. So all very much upper class people being upper class...and talking LIKE THET...

It all descends into farce really then - with turns by the great Terry-Thomas and of course Alistair Sim and his protégé to whom he was mentor: George Cole.

Some good bits but don't expect too much.

The scene with the doctor who asks if someone is registered with the new National health Service is classic - the mention of payment changes his mind LOL.

A Misfire. - The Green Man review by NC

Alastair Sim as a hit-man. The mouth positively salivates at the thought. Wouldn't you know it, the anticipation is the best part. For 'The Green Man' is one of those old British comedies (there seems to be hundreds) which have dated badly. Fraught predicaments are forced, comic lines no longer raise a smile, let alone a laugh, Terry-Thomas plays Terry-Thomas, George Cole plays George Cole, and even Sim himself plays his character as if he's become rather jaded with having to carry a poor film time after time. Not awful, but the non-event makes it seem so.