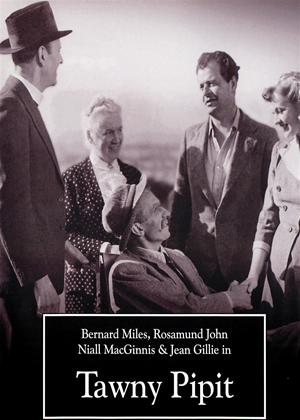 A Flight Of Fancy. - Tawny Pipit review by NC

A propaganda film (1944) that trumpets an idealised Britain which never ever existed. I'm sure it retains a lot of charm for a lot of people, but this old cynic cannot see past the Potemkin village facade.

If only it was believable that there was once a time when a whole community would unite to protect a nesting bird, and this represented a country of 'welcome' and 'fair play'. It might be argued that you don't have to believe all that guff to enjoy the film, just accept it as a pastoral idyll, in much the same way as a Vaughan Williams symphony, for instance. But it's a false idyll. An insular island people, unceasingly destroying the nature around them, inveterately racist, are here dissembled as the exact opposite. The shots of the pipit (even if it is a 'meadow' and not a 'tawny') are beautiful, though.

It's one of those films where everyone talks in a very correct, very 'U' way. Even the land girls, straight from shop and hairdressing work in the town, have ever so clipped voices. The acting is as stiff as the accents. Bernard Miles goes over the top (perhaps deliberately) as the major in the village. He's of the type you normally see shooting birds rather than saving them.

It has interest as a piece of propaganda, but I'm not fooled into thinking this was ever what Britain stood for.

This film is not subtle; it's good versus bad, black versus white. They represented us versus the Nazis in a very simple manner, with the baddies trying to steal rare bird's eggs and failing. The message is clear but the story is too simple,

A Nest of Intrigue - Tawny Pipit review by CH

Here is a film with added resonance in our era of savouring the sight and sound of bird life amidst the encircling chaos of pandemic and climate emergency. What's more, if one missed the first few frames of Tawny Pipet (1944) one could easily take this for an Ealing production. Here we are in the wartime countryside, somewhere in Gloucestershire. A fighter pilot (Niall MacGinnis) recovers from injuries, accompanied by his nurse (Rosamund John). They are turning this enforced leisure to account by rambling the hills around the village and taking the opportunity to enjoy a shared hobby of bird-watching.

To their delight they chance upon a pair of the eponymous creatures which have not been seen upon these shores for some time. What's more, these ground-nesting birds are protecting some eggs.

Such are ornithological circles that news of the discovery spreads within the village and, ominously, beyond. The villagers are united in protecting the avian visitors and their potential offspring. An open-air meeting is addressed to that effect by wheelchair-bound Colonel Barton-Barrington, played by Bernard Miles who co-wrote and co-directed the film with Charles Saunders.

With the village setting, and a gathering of such types as a schoolteacher, mischievous but good-hearted children, a vicar, a publican, one is reminded of, among other things, Went the Day Well? a year before. Tawny Pipet is equally well photographed. Some might deem it sentimental but there is a tough edge, it springs surprises (including Julian Huxley in the credits alongside the two birds who did such stirring stuff).

Has there ever been quite such a confrontation with a tank? The very vehicle itself appears to back off, such is Rosamund John's passionate reason. And as surreal a moment as a Russian who, on a propaganda mission, regales the villagers from the back of a truck with tales of how she herself felled hundreds of Germans? Far from the hodge-podge this might sound, the film has a compulsive glowing logic which can fell the cynical from forty paces.

As indeed it did James Agee when it reached New York a few years later. “It is an almost unimaginably genteel picture, and if you had, as it were, to sit in the same parlor with it, you would probably suffer a good deal. But at this comfortable distance in blood as well as space, I was able, rather to my dismay, to take all this extreme Englishness almost in the spirit in which it was offered...in spite of its profuse cuteness and genteelism, it has a good deal of genuine charm, humor, and sweetness of temper.”