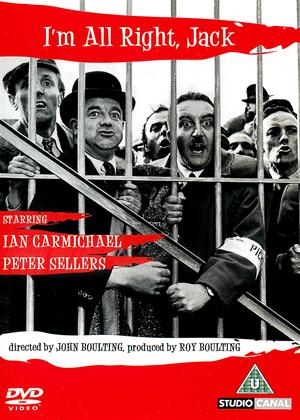 This film is a classic. Dates, yes - though it was made in 1958/9, though still relevant re the clash between union demands and the general public's common sense views (see the tube strike, where drivers who start on almost £50k a year are moaning and striking, delaying hardworking Londoners who earn less than half that).

A great cast Terry-Thomas, Peter Sellers, Irene Handl and many more. One of Peter Sellers' very best roles, which he plays to perfection (though he was only 34 at the time but looks 57!)

Some classic lines, with the Soviet Union worshipping union shop steward played by Peter Sellers dreaming of 'all them cornfields, and ballet in the evenings.'

A terrible 'feem toon' - but hey, it was pre-Beatles 1959 and you can't have everything!

Worth a watch to see the way union/management relations really were in the 50s, 60s, 70s. That is why Thatcher was elected.

Lots of non-pc references to race in this film - which I suspect they cut before allowing it on TV< which is a shame. Let it stand as it is! To show how racist the left wing unions could be.

All Jeremy Corbyn fans should watch this too. This film has relevance to modern Britain alright.

In my top 50 movies of all time. Watch side by side with Dr Strangelove.