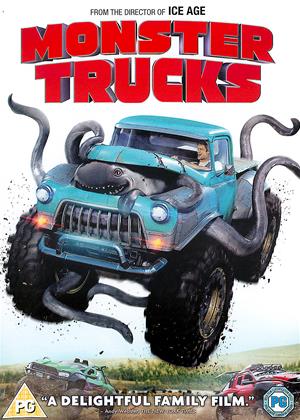 What a strange story, drilling for oil, suddenly 3 creatures blast out of the pipes, from an 'Aquafer' body of water deep underground.

'Hairy' tentacles that can provide the same power as a V8 :-).

Some very bad acting, but very impressive vehicles.....Watching the extras the money spent on the film, seems to have been spent on Trucks which were destroyed, trying to outdo Dukes of hazzard??.

An enjoyable film to watch when snowed in of an afternoon. What age-group was this aimed at, Monster Truck fans/teenagers??

Monster Trucks is a fun action/comedy flick featuring quirky characters, imaginative CGI, and an original script that puts Transformers to shame. With that being said, Monster Trucks has its fair share of flaws, but they’re so scattered as to one wouldn’t even notice them (if it weren’t for the magical world of Internet archives). However, these minor detractions do not take anything off the experience, and with a clear conscience I can exclaim Monster Trucks to be surprisingly good.

The film follows a teenage boy called Tripp (played by Luca Till), who along with his mentor Meredith (Jane Levy) find the most peculiar of creatures unbeknownst to anyone in close proximity to them. This creature is unheard of (a fantastical being), and out of compassion – Tripp decides to keep it and names him Creech. However, some bad people are after this newly baptized Creech, and so Tripp has to devise a plan in order to bamboozle these folks and hide Creech in plain sight. And he bamboozles them indeed: he builds a truck in which Creech can serve as the truck’s engine (quite original and creative I might add). And thusly the film’s title comes full circle, wherein a play of metaphors grows into reality in and of itself (Monster Trucks, get it?).

Monster Trucks plays a great deal of importance to its characters. In fact, Meredith and Creech are one of the most loving on-screen characters to date, which is truly refreshing to see after all the cultural Marxism that slowly managed to creep its way into Hollywood (and is latching strong to date). Tripp is also great, employing his humorous and witty banter against Meredith’s abstinent remarks; the dialogue between them flows as seamlessly as a snail’s arse on a rainy day. And Creech; this guy is theoretically a monstrosity, but he is so full with life that Jennifer Lawrence should start taking notes (if anything). This trio (Tripp, Meredith, and Creech) drive the film forward and bring the whole ordeal to life, knowingly, that in a parallel universe somewhere, somehow, original scripts could possibly come off without a loss at the box office. Alas, as long as we pay tickets to regurgitated superhero tales of old (me not excluded), this day only remains a faraway ideal for better times to come. End of wall of text.

Finally, Monster Trucks is a film that everyone can relate to, but especially kids: it has a strong sense of morality, with a much needed moral compass simultaneously existing in a society that has currently dropped the plot culturally-wise. It also has some great jokes, awesome banter, and admirable CGI as well. Give your kids a favor and see this movie at once!