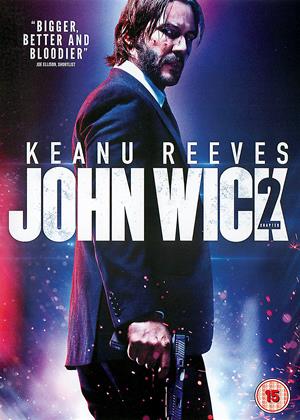 If you enjoyed the first film then this is a must see, action all the way through with a good cast and storyline... leaving it open for another Chapter. Highly recommended with a strong performance from Keanu Reeves.

Turn up the Wick - John Wick 2 review by NC

If liked 1 will like 2. Just find the films a bit banal. Reeves is deadpan all the way. Totally invincible to any bullets, so may as well have a coloured suit on. Suit up for Marvel.

None of the opposition can apparently shoot, and like to run at his bullets. How many guards do they have at any one house/event? Must have shot over 100 in quick succession. Mostly exploding heads for greater effects staff to do their thing.

At least in Transporter films Jason IS actually fit, slightly funny, and does some slick driving scenes. Fractionally more intelligent action film........next up to that would be the Bournes, which try not to be too stupidly incredible.............

This is a great vehicle for Keanu, who's always at his best when he doesn't really need to act but gets to move. I love his habit during the film's (many) gunfights of holding one enemy down while killing others before slaying the one he's got a grip of. The plot makes absolutely no sense, but I guess the point is to get John as quickly as possible from tranquility to acts of killing, and in that sense it works well enough.

Full on choreographed fight and action sequences, with a mystical "the firm" code overtone.

This has to be up there with top 5 worst films that I’ve ever seen, ever.

Everything is awful, the story/plot, the acting, the sound, the script and the shooting accuracy most of all.

A lot of people have a quite different opinion to me and the frightening thing is that these same people get to vote on critical national matters. FRIGHTENING

this is what my girlfriend said to me when this movie finished,and i have to say,for once i totally agree with her!!i we watched the first one when it came out,nothing spectacular,but a sat nite no brainer.wanting another no brainer this weekend we got this.oh dear,oh very dear!!i could have turned it off half way through and not been bothered.if you are a thirteen year old boy who lives on his xbox,you may enjoy this.unfortunately for me and the gf,we have spoilt ourselves watching brilliant world cinema,and indie films.john wick 2,is right down there with taken 2,battleship,and transformers.the worst film keanu has ever done.

Not a patch on the first one

How many people can a person kill in a film

Couldn’t be bothered to count up

1st was great, so they made a 2nd John Wick. There won't be a 3rd! - John Wick 2 review by William London

The first movie was innovative, fun, and overall a great experience. This second chapter doesn't bring anything. It's a failure. It's just a filler until they release the final chapter. It feels like Matrix 2.

Pretty brain dead, nothing to think about... Nothing much different from the first John Wick....

It really does get on my wick.

Good action movie for a night in! - John Wick 2 review by CS

Following on from the first movie, this is an all action movie, in much the same vein as the first. Slick, stylish, fast paced, action throughout. Not a lot of originality, lots of fighting and the usual hand to hand combat. But enjoyable, with some smart sets, scenes and good stunts. the actors all play their parts well and the whole comes together nicely. i thought the ending was a bit damp, but in all an enjoyable film to watch!

Well the baddies cannot shoot straight and Wick shoots anything in sight. The slightest bit of organisation and he would be toast in 2 minutes given the scenarios. Pulp rubbish, but if you like mindless violence as an escape thing be my guest. This garbage makes the Star Wars scripts seem intelligent! I cannot wait to avoid Wick 3.

Keanu Reeves has finally found one of his best roles in his return to the character of John Wick. He’s never been a master of dialogue, but that’s just fine for such an action picture with a simple premise and elaborate sequences. He doesn’t have to deliver long and dull passages of his intent to kill; he just needs to get to the point and be an intimidating force of bullets and knives. And in his most trim of new suits, with a cold desire to kill in his eyes, he’s certainly one of the most intense action heroes of the 21st century that doesn’t waste his bullets or our time.

John Wick 2 continues the story of the not-quite-retired assassin, still not done with his revenge path. If you’ll recall, Wick’s kill quest was started after Russian mobsters shot up his dog and stole his car. Having taken out the man who killed his canine, Wick 2 opens with him taking back his car from the current gangster possessors. As with any task in the world of Wick, this is not an easy means of taking back his car, nor is it a simple action scene. Everything you need to know about the titular gunman and the sequel is made clear in this sequence, as Peter Stormare recaps with his associates while John (Reeves) lays waste to gangster after gangster, while being smashed into by car after car. It’s a ridiculous scene of overkill, but played up with such a tongue-in-cheek unflappable nature that I couldn’t help but enjoy its construction.

His car back in his possession, Wick’s revenge has been completed. He repairs his car and gets a new dog in his life. If only life were so simple. Of course, an associate from his past has come to collect debt that was formed in a blood pact of sorts. Wick refuses and has his house demolished. Don’t worry, the dog survives. Had he not, Wick would’ve probably leveled the entire crime world. He’s content enough to negotiate after such an ordeal with a higher crime boss (Ian McShane), but won’t receive much help. Stuck with an assassination job, Wick makes the most of it. After all, he gets to travel abroad, don a fancy suit, attend an outdoor concert at Roman ruins and gets to secretly assassinate someone with a fancy new armada of firearms. But, of course, it can’t be an easy mission, eventually leading to John Wick once more being a target of criminals.

For the first half of the picture, Wick 2 is a stylish and fast-paced action picture with some great cinematography and a simple enough story. But in the second half, the film goes for broke by throwing as much crazy crap as it can at the screen to an absurd degree. After a hit is placed on Wick, New York City turns into a city of killers, where it seems as though every pedestrian is an assassin bent on taking him out. Some of the colorful characters of the crime world include an old nemesis of Cassian, played straight by Common, and the tough negotiator of crime lord The Bowery King, played by Laurence Fishburne with more enthusiasm than I’ve seen out of him in years as a boss of underground bums. Franco Nero returns as hotel manager Julius, who has learned from the last film not to mess with Wick’s dog, and Ruby Rose plays the silent killer Ares, speaking only in sign language and letting her bad-ass style of killing do the talking.

Unlike most action movies that throw everything and the kitchen sink at the screen, director Chad Stahelski has the decency to polish the porcelain before chucking it at us. There are plenty of action sequences with violence both efficiently smart and hilariously overblown, but they all look gorgeous. The entire sequence where Wick flees from his attackers in Roman ruins features some amazing lighting for a shootout location I wouldn’t usually expect out of these movies. Wick will later lead some assassins into an art museum’s house of mirrors exhibit that plays wonderfully with perspective, but never becomes so disoriented that we lose sight of the battle. And though Wick’s road of revenge is filled with dozens upon dozens of bullets in brains, fists in faces and pencils in ears, there always felt as though there were an element of control, as if Stahelski was constructing an action ballet of perfectly coordinated moves.

John Wick 2 is such a romp of an action picture that has the refinement of an intellectual with the wild imagination of an adrenaline junkie. It maintains that unequal precision and focus of a simple tale of revenge, making me all the more eager for the eventual third film in the trilogy. In an age when most frenetic action films are tagged as dumb fun, this is pure fun you can count on not destroying your brain cells.