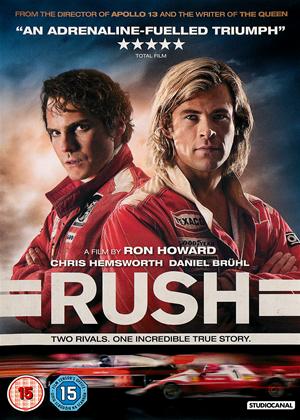 Excellent storytelling based around the 1976 Formula 1 Season.

Edge of the seat action shots recreated as if we are sat in the cockpit.

The rivalry between Hunt and Lauda is examined throughout the film and shows both the bitter rivalry and genuine moments of both mutual respect and real friendship.

The risks of F1 are graphically shown and the single mindedness of individuals to beat the odds draws you in to a film you have to watch right through to the end of season in Japan.

I didn't knew what to expect and was positively surprised, emotionally touched, lol at times - so for me - entertaining.

I enjoyed it - but it's a good film, not a great film - Rush review by RP

It's a drama, told in a semi-documentary style, about the on-track rivalry between Formula One racing car drivers James Hunt and Niki Lauda, and specifically the 1976 season when Lauda was horrifically burnt yet still competed.

While it's not a bad film, it really does seem to be a boy's film about boy's toys - fast cars and beautiful women, money and fame. Back in the 1970s Formula One seemed less corporate, a time when it was still possible for a rich man to bankroll a team, a time when it was possible for a rich playboy to be a racing driver. James Hunt was the son of a wealthy stockbroker, Lauda the son of a wealthy banker - and while they clearly had the necessary driving skills, they also had the kind of background that allowed them to play with boy's toys and indulge themselves in racing without having to work for a living.

Hunt is portrayed as brash yet talented, a reckless driver, a heavy drinking womanising playboy, careless of the risks he took both on the track and in his personal life. Lauda is shown as more professional, cool, calculating, more Germanic (OK, Austrian...), more restrained, more risk-averse. How true these portrayals are is hard to judge - but in real life they were friends and I believe they even shared a flat back in their early days, so I suspect there's more than a touch of dramatic licence in the tale.

The acting is good - Chris Hemsworth plays a good Englishman for an Aussie and Daniel Brühl makes a good Lauda, even if the scripted dialogue is a bit stilted.

It's a good looking, well photographed, well acted film, some good racing sequences, tense where it needs to be and I enjoyed it. 3/5 stars.

Is it accurate? - Rush review by JD

I find it frustrating to watch a documentary/biography style film and not knowing how much of it is true. Did Lauder really pull out of a grand prix after 1 lap because it was raining? Did Lauder really suggest that his car was rebuilt in Magnesium alloy? Did he really have rigid bronchial washouts without sedation while watching television? OK the last one is obviously false but without knowing whether all of it (except the car on fire) was false takes the enjoyment out. The race scenes are very well filmed, not many will stay still in their seats. These scenes alone make the film worthwhile.

They say in Rush that at the end of a Formula 1 season at least 3 of the drivers will have died, something they further elaborate on when Niki Lauda (Daniel Bruhl) states that in every race there is a 20% chance he is going to die, a statement that effectively sets the stage for this mesh of blurred colours and roaring engines pelting their way towards an uncertain finish, hoping to prove their worth.

Rush follows the contentious relationship between F1 racers Niki Lauda and James Hunt (Chris Hemsworth), two men searching for glory, something that might win them the unachievable goal of their parents respect. The two clash and fight their way through their careers hoping to understand the other man and what drives him beyond their love of this extreme sport, a pure adrenaline shot’s worth of fear and high speeds.

Perfectly shaped and shot by director Ron Howard (A Beautiful Mind) depicting some truly breathtaking race sequences filled with wonderfully fluid movement and some exceptional editing that keeps the frenetic pace required for the speeds these racers are achieving. The film while at times ever so slightly soapy with Hunts and Lauda’s relationships depicted at length, keeps these two’s never ending conquest to make their mark firmly in mind as these people do amazing things to get there.

While filled with impressive action the film is really about the little moments, the ones where Niki and Hunt truly affect each other in a profound way, the kind of merging that brings out the worst and the best in these two people as party boy Hunt and obnoxious yet intelligent Lauda see past each others personas and understand each other perfectly.

While the film is twenty minutes too long, it ends with the juiciest scene of all as Niki and Hunt share a conversation, one filled with ambiguity and veiled comments but one that cuts to the core of F1 and these two eccentric but memorable racers as we come to understand that its not about the danger or the thrill, its about the feeling of control you can have at a time when you have absolutely none, a believe in your own abilities and those waiting for in the pit stops along the way