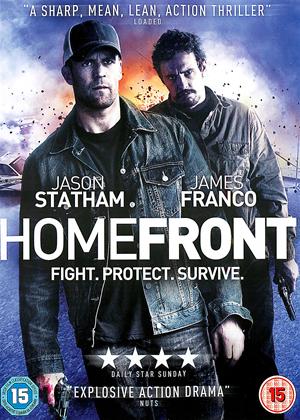 The Stath is back! - Homefront review by PC

Homefront won't win any awards but you cannot deny that it is fun watching Jason Statham doing his stuff. There is a good supporting cast here as well, Kate Bosworth particulary good as the drug addict Mother who starts the trouble. It runs along at a fair pace, makes no sense, but is entertaining.

After the entertaining and unexpected delight of Hummingbird, Statham’s previous feature film, he is back to starring in poorly constructed, weakly told action nonsense like Homefront, a mish mash of offensive stereotypes cobbled together into one of the worst scripts to ever get turned into a feature film. The kicker? It’s written by none other than Sylvester Stallone.

Homefront follows Phil Broker (Statham) as he moves to a small southern community following his involvement in an undercover operation gone bad. When he inadvertently causes trouble with Gator (James Franco) he brings about an endless barrage of problems as his past comes back to haunt him and his new life with his daughter.

While Stallone might see his screenplay as biting satire of corruption and community its really just a mixture of offensive ideas long since forgotten in favour of material with actual substance. The films meth dealing villains, led by Franco putting on one of the worst southern accents committed to film, are just paper thin cut outs of Stallone’s idea of a swamp dwelling criminals, with the expected amount of drug taking and nonsense spouting.

The film has plenty of reliable actors like Winona Ryder and Clancy Brown, as well as a performance by Kate Bosworth that almost makes the film passable, a kind of human being, something that doesn’t quite belong with the people written into Homefront. In fact Statham works well with characters who contain a little bit of mystery so considering that Broker has nothing to him, no characteristics, no life to him, Statham actually makes him watchable as you try to figure out just who Broker is even though there is no answer to that question.

The whole feature is deathly serious as it chastises the south, insults the idea of community and family while never quite telling a story with all its ducks in a row. Overall Homefront is just drivel trying to be a taut political action thriller. In the end I would suggest watching Mud if you're looking for a look into the south worth a damn. If not, still stay away from Homefront.