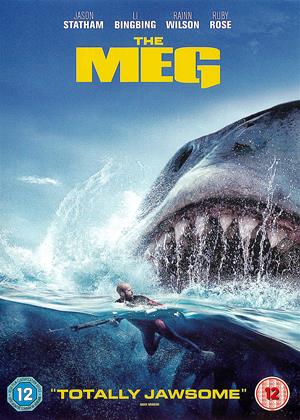 Great monster, Great films to copy from.. how can they get it so wrong? - The Meg review by JD

I dont get how you can make a film this bad.

The cast are awful. Infact only the evil corporation guy comes across entertaining. The script is terrible, the plot laughable.

CGI is far to obvious.

Its almost like they have gone out of there way to make it as bad as possible.

Come to think of it, that episode of peppa pig when they went sailing is better than this (it really is)

On the bright side it shows how good the original Jaws was. Less action, less budget, less diverse cast, ropey effects. Yet it eats the meg alive.

I cannot believe one review here claims THE MEG is superior to Jaws because the latter takes too long to get to the action whereas this hokum monster movie gets to it quicker. If that is how you judge the quality of a movie, I'd suggest your opinion's not worth taking on board really.

JAWS was and is a classic movie - unlike the dross Spielberg makes now. This is like a Poundland Jaws - a forgettable, silly, CGI-created mash-up of ideas nicked from Jaws and many other movies too. ALL pandering and kowtowing to the great Chinese empire with Chinese characters and settings - all with an eye on many more dollar, quick quick!

ALL very ironic as demand from China for shark fins to put in soup (the fins have no flavour so it is flavoured with chicken stock - all a status symbol of that backwards superstitious dictatorship society) have resulted in 90% of large sharks in OUR oceans being killed in the last 20 years. Similar levels of devastation of large mammals thanks to Chinese demand for fake medicine cures and trinkets - in Africa, 50 years ago, there were 500,000 lions; now there are estimated to be 40,000 or even 20,000. Ditto for elephants. Rhino and tigers almost extinct in the wild. Thanks, China.

And as per usual, we have a pc diverse tick-boxy cast with ethnic characters aplenty and, predictably, women in charge of piloting a submarine (HOW many female sub captains are there in the world? Even one? I doubt it), and the person who designed the entire IT system of the marine base is a tattooed metoo smug arrogant 'girl power' woman too. Yawn. So unrealistic and silly, MOST IT systems designed are fat balding men, usually white but some Asian, and very few women!

BUT there were some funny bits and some tense action - with the gore as predictable as the plot.

Both JAWS and THE MEG were based on popular novels, apparently. JAWS is a classic movie; this is B-movie popcorn trash and as long as you don't expect more, it's fun enough for a Friday night watch.

I actually own a fossilised megadon shark tooth and it is pretty big though they get MUCH bigger than the one I own. Massive monsters.

Makes me giggle too that THE MEG is apparently the nickname palace staff give to bossy pushy Meghan Markle lol.

3 stars for the fun and action.

Rubbish - The Meg review by JD

what the heck is a "creejure"? - The Meg review by RM

what the heck is a "creejure"? This sounds like another unknown actor cheepo worse than "B" film that doesn't deserve to waste the planets resources by being pressed as a DVD. Why Cinema Paradiso do you insist in listing rubbish like this? Is it because there are no decent releases to populate my list with?

OK, so its not Great Art , who cares it was Fun.

Massive Shark attacks and Kills Rich People, what could be better than that ?

Perfectly does what it says on the Tin.

Really enjoyable update on the classic Jaws theme! - The Meg review by CS

I've read some really bad reviews of this film and was tempted particularly to give it a miss due to the reviews here on CP. However because it was Jason who can usually be relied upon to give us something at least half decent in an action movie, I gave it a chance and I'm really glad I did! First off this is really nothing more than a modern update of the cinematic classic 'Jaws', however whereas Jaws drags on for ages before any real action happens, true to form, this film is choc full of action right from the start. Contrary to what others have written, i actually thought the CGI was pretty good, there are some fantastic underwater shots and the aerial view of the shark swimming underneath a beach/sea full of swimmers on their rubber rings and inflatable loungers is great. This film most certainly won't win any oscars, the acting is average, as is the script and storyline and it's slightly predictable in part, yet it still manages to deliver some great jump out of your seat moments and draw you in. Really an updated version of those what we now call classic Monster B Movies from the 50's and 60's. I really enjoyed watching this and whilst it's not a blockbuster of a movie, it's still a pretty good and fun watch that doesn't take itself too seriously!

The answer to jaded shark movie palates. - The Meg review by KF

The producers came up with an innovative answer to revitalise jaded shark movie palates. Make the shark bigger! And it works! (sort of)

Daft, but fun - The Meg review by AL

I didn't expect much from this, but I'd heard it had been a big hit, so thought I'd give it a go. It wasn't your normal America saves the day at all, which makes a pleasant change. Nice premise to the movie as well. Can see how the films going to play out from a mile away. But as long as you remove brain before watching, it's thoroughly enjoyable throw away film. CGI wasn't too bad either. Imagine they'll be planning a sequel.

Daft, but fun - The Meg review by AL

I didn't expect much from this, but I'd heard it had been a big hit, so thought I'd give it a go. It wasn't your normal America saves the day at all, which makes a pleasant change. Nice premise to the movie as well. Can see how the films going to play out from a mile away. But as long as you remove brain before watching, it's thoroughly enjoyable throw away film. CGI wasn't too bad either. Imagine they'll be planning a sequel.

In the genre of shark movies that are either stellar character-driven stories of terror (Jaws) or insanely goofy camp-fest (Sharknado), The Meg exists in a balanced purgatory of a B-movie. Too serious to be silly and too winkish to be frightening, it’s a film so unbelievably safe, teeth rounded and loaded up with PG-13 floaters. For those seeking simple and dumb summer fun, it’s hard to deny that this movie doesn’t fill that quota. But in trying to tap that vibe, the thrills come more artificial than genuinely entertaining.

The film starts off promising enough with a dazzling underwater research facility, armed with high-tech research vessels that probe an unexplored pocket of the oceans. When a research team ventures into this new world, they discover a wondrous sight of all sorts of new species, either yet to be discovered or thought to be extinct. In the thought-to-be-extinct category is the Megalodon, a massive shark that can eat whales like a corndog and swallow dogs like a peanut. So far so good, but there’s a nagging thought in the expositional dialogue and lacking characters that film will be nothing more than a modern update of those drier 1950s monster movies. While this direction may carry a certain nostalgia for yesteryear, it reminds why this genre favors more parody than preservation.

The characters are all charisma and little personality, some providing more than others. The king of this picture is undoubtedly Jason Statham as the daring deep-sea rescuer called in to save the day. His cocky attitude and infectious smirk, more present here than it has been in any other film, is perfectly suited for a campy atmosphere. He nearly tows this movie all by himself with his smartass action movie persona, so much so that he feels almost alone, working overtime to make the movie worthy of a laugh and a wince. The supporting characters merely standby until they can make a quip or spout some exposition. Ruby Rose plays a tattooed engineer, but never delivers a memorable line or personality, merely looking like the badass girl who would rather be in another movie. Page Kennedy plays the cool and commenting scientist that is reduced to little more than “hell, yeah” talk. Even Rainn Wilson feels underused as the greedy dolt of a billionaire that invests in the research facility.

The only other character on Statham’s level, or at least aloud tag along with him on shark hunting adventures, is Li Bingbing playing an oceanographer eager to hop into an aquatic craft and do the job herself. While she’s given more of an emotional edge with her family on the station, from her doctor of a dad to her angel of a daughter, a lot of her development comes bafflingly out of left-field. She seems to have a nice relationship with her father, but it was apparently a rocky one in a confusing confession during a life or death situation.

All this lacking in notable characters can all be washed away with the film’s main draw of being an exciting killer shark movie. But as far as killer shark movies go, Meg seems most mundane in its carnage. Maybe I’m seeking too much out of a PG-13 shark movie, but how can you film on one of the largest beaches on the planet with one of the most massive assemblies of swimming extras and not go nuts with shark kills? Sure, he’ll eat a few people, but he seems to cause more chaos knocking a few boats and platforms around. Jaws is laughing at this beast, so big and yet so incapable of eating the dog, saved in a post-production edit to make sure nobody writes an angry letter about a canine being turned to lunch.

With expectations ramped way low, The Meg can be enjoyable as passable summer camp. But if you’ve become seasoned to the subgenre, there’s clearly more potential here that is held back for the most passive and broad-reaching of entertainment value. It’s a blockbuster most stock that the only genuine laugh I got out of the film was its clever ending title of “Fin.” It’s a dumb joke, but The Meg could stand to be dumber if only to be more than forgettable.