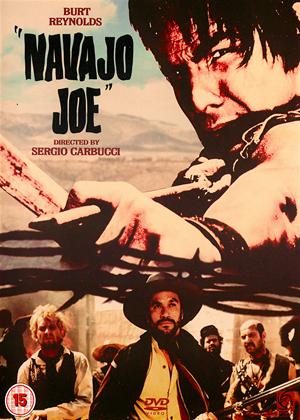 Sign up
If You Meet Sartana, Pray for Your Death

Sergio Corbucci was one of the masters of the spaghetti western, second only to Sergio Leone. Unfortunately, this isn't one of his most inspired films - indeed, he made it at a time when he was still learning his trade. The plot is extremely formulaic. It hardly constitutes a spoiler to say that the hero is a super-competent revenge-seeking man of few words who, in order to make the film last long enough to qualify as a feature, is captured by the baddies halfway through because he's unwilling to let innocents die instead of him, and sadistically beaten to a pulp, but gets better and kills all the remaining villains, because that's the plot of just about every spaghetti western ever made.

It's nice to see a Native American avenging the massacre of his own people instead of being the white hero's sidekick, and Burt Reynolds looks surprisingly convincing in the role, probably because he's part-Cherokee, but I got the feeling his heart wasn't quite in it, and neither was anybody else's (Reynolds himself considers this his worst film, but seeing as he's worked for Uwe Boll, that's a bit harsh!). Corbucci's most famous movie, "Django", carries a similar anti-racist message, but allowing a Navajo to be the hero of the film and save the white folks who doubted him, and make a brief "I'm more American than you are" speech while he's at it, is neither as radical nor as entertaining as Django mowing down the massed ranks of the KKK with a machine-gun!

As for everybody else, characterization is minimal at best, and whenever somebody threatens to become interesting, they're either forgotten about or killed. In particular, the embittered half-breed villain's relationship with his conspicuously pure white and apparently less villainous half-brother keeps looking as though it's a major plot-point without ever really becoming one. And although there's a fair bit of action and some quite bloody violence, by Corbucci's standards, it's mostly both a bit tame and conspicuously low budget - watch out for the most underwhelming train-crash ever! Though oddly enough, the extreme youth and callow incompetence of the soldiers guarding the train appears to have been directly lifted by Sam Peckinpah in "The Wild Bunch".

I want to give this film 2½ stars but that's not an option, so I'm going to have to give it 2, because it's just not that good. Corbucci completists may appreciate it, but he made several vastly superior films, and I've yet to see one which is worse (though admittedly I'm not familiar with "Goliath and the Vampires"). And it has to be said that Burt Reynolds seems to get a lot more into his role whenever he has to be very athletic while keeping his face turned away from the camera, so that's presumably his stunt-double. As for Fernando Rey, the only other actor in this film whom you may have heard of, he's utterly wasted as a priest who has nothing to do with anything. Still, it passes the time.