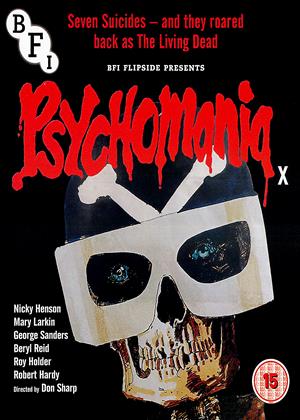 This is a bad film. Thematically it's all over the place, because it doesn't know whether it's supposed to be horror or comedy, therefore there's almost zero actual horror, and not that many jokes either. Its rather low budget shows in every department, and as biker movies go, a gang of eight people, including two girls, zooming rather slowly around the sleepy English countryside pursued by one police car aren't the most formidable of menaces to society. Yet it's an unappreciated classic of so-bad-it's-good cinema. Look at that cast! Nicky Henson, best known for "Confessions of a Window Cleaner" and other soft-core seventies sleaze, teamed up with veteran Hollywood character actor George Sanders (who committed suicide shortly after completing work on this film, presumably for unrelated reasons, because no film's THAT bad!), and Beryl Reid, who was in two horror movies including this one, and shouldn't really have been in any.

This is one of a handful (I wish there were many more) movies made by an obscure Anglo-Spanish studio called Scotia, which also gave us "Horror Express", undoubtedly the best film ever made in which Christopher Lee meets a telepathic undead space gorilla on a train, and the sublimely-titled "A Town Called Bastard", an ultra-violent and very confusing spaghetti western notable for a scene where Telly Savalas is crucified in mid-air. As you might expect from script-writers of this calibre, the utterly bizarre subject-matter makes up for some lousy acting and the excruciating seventiesness of it all - there's even a biker called Gash who looks alarmingly like a teenage Alan Partridge.

The sequence in which several bikers cheerfully commit suicide in various increasingly excessive ways in order to rise again as immortal superpowered agents of Satan is genuinely hilarious, but most of the humour is at least borderline unintentional, especially as George Sanders and Beryl Reid appear to be playing their parts absolutely straight (possibly Nicky Henson was too, but in his case it's impossible to tell). And what's with the toad obsession? But in its own way, it's tremendous fun. And there are an extraordinary number of direct visual references to the first "Mad Max" film, even though it was made six years later. Coincidence? I wonder...

As I said, it's not actually good in any conventional sense, but if you're willing to switch off your critical faculties and enjoy the sheer silliness of it, it's a gleefully daft hour and a half.