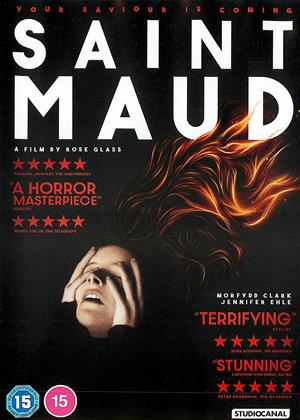 Bit of a let down - Saint Maud review by TH

I have been looking forward to this film ever since the great reviews from critics and the trailer which looked really interesting.

However I feel like I'm missing something. I get the story and get the message but I just didnt really engage with it.

The acting was decent enough and the religious imagery was great but the plot felt very drawn out and as others have said this felt more of a drama and less of a thriller or horror that this was marketed as.

I guess it had high hope and felt a bit let down.

Added the 2nd star for the ending

Okay its hard to be original nowadays but this film is actually as good as the critics reviews. Don't understand the 'horror' label, it's a smart pyschological drama, with the viewer trying to piece together who Maude actually is, and why she has 'found God'. You wonder what is real and what is imagination.

This powerful debut from Rose Glass is one of those religious fanatic meets psychological horror things, charting the gradual breakdown of a lonely young woman convinced that she is on a divine mission, and features a terrific performance from Jennifer Ehle as faded celebrity Amanda, and a bold, quietly nerve-shredding lead from Morfydd Clark. It's at its best when it sticks to psychological unease (the first half) and at its worst when it goes for the horror (the last section).

Clark as Maud is really good throughout, but especially in the claustrophobic live-in nurse first half, supplying palliative care to the prickly, cynical Amanda, who surprisingly warms to Maud’s artless devotion and God-given / self-appointed divine purpose to save this ‘lost soul’. The film’s classiness lies in the way that, for the most part, it depicts a realistic depiction of Maud’s mentally and economically distressed world, superbly evoked in Paulina Rzeszowksa’s production design and in Ben Fordesman’s camerawork (I'll ignore the score, which is awful). Rather than weigh things down with too much pathological case history, Glass adroitly lets us guess at the background of a seemingly brainwashed cradle-Catholic, but who, as revealed partly in encounters with a former co-worker, once lived a very different life and is anything but. Glass also impressively achieves a delicate balance in taking Maud’s religious conviction seriously, while sensitively portraying the mental disturbance that drives it, and astutely uses religious imagery to get inside Maud’s head (it didn't need William Blake, but I gettit), whilst being just as skillful in portraying the painful near-immobility of Amanda, whose art has stood for the freedom of the female body. While the story is clearly set in the present, production design, costumes etc subtly blur markers of the period, with hints of the 60s and 70s. This teasing indeterminacy gives the film a timelessness that also accentuates its echoes of Polanski’s Repulsion; indeed, Clark gives a performance that is as bold, and as vulnerably isolated, as Catherine Deneuve, and that's quite something.

Glass overplays her hand in the second section where the film briefly lurches into more generic horror mode, which jars with the painstakingly established realism. But overall, the film is ultimately successful, a moving study of a troubled soul.