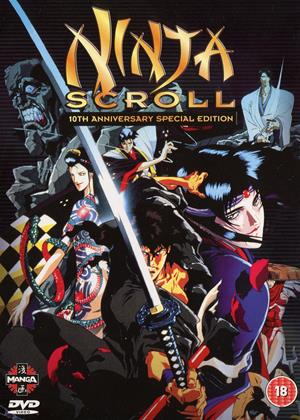 Yoshiaki Kawajiri, one of the last remnants of the classical Japanese full-on 2D animation that unfortunately went on to produce and make mediocre live features instead. Why did Yoshiaki had to do this to us, why? If only you’ve stayed on track and followed up your animation ideas with the latest tech, tears could’ve been shed, armies would’ve been rallied, nations would’ve been broken and re-assembled again, earthquakes would’ve shifted the tectonic plates of the great old Pangaea into nothingness and despair. Yet, all our pledges for Yoshiaki to continue making animated features fell on deaf ears; Oh, and Ninja Scroll by Yoshiaki Kawajiri is also a pretty dope film.

Ninja Scroll follows Jubei Kibagami, a lone samurai who just wants to get with his day without interrupting anyone in the process of doing so. However, it seems like Jubei is always followed by trouble, and so wherever he goes there are some wrongs to right and some baddies to slash into pieces as well. The story closely follows a comic book pattern that goes usually like this: hero is entangled into conflict against their own liking; then, hero is forced to battle seemingly impossible to beat enemies which come in series; hero beats enemies either by trickery (a trickster), or by pure power and strength (a typical hero); hero gets girl and rides off to the sunset. The End. Of course, there are variations to this story, but more or less Ninja Scroll is closely following this pattern as it goes. And for some reason, – albeit nothing spectacular – the story works flawlessly.

However, that’s not the main focus of the film. What’s really important here are the characters and the absolute ingenuity of how they’re fleshed out, down to the minute details, bearings, discourses, and everything that encompasses a living, breathing, comic book character (little idiosyncratic, but descriptive nonetheless).

Let me illustrate this with an example: i.e. the eight devils of Kimon. It’s impossible to forget even one of these antagonists because they’re so distinctive when pitted against each other and work wonders both separately and in a group setting as well. Take for instance Tessai (whether you’ll remember them by name or not is irrelevant), a giant, powerful man with an impenetrable stone skin wielding a deadly double-edged sword. In the opening sequence of the film, he wreaks havoc to both nature and biology with his sword and is a force to be reckoned with. However, just as the rest of the devils, all of them have very human flaws which Jubei or friends exploit them during their battles. Which makes them relatable, or at least to a certain point so.

Finally, Ninja Scroll is what initially got me into anime, so be sure to check this out if you haven’t had the chance to during all of these years while it was out.