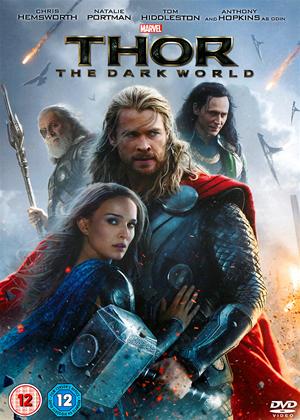 Reviews (2) of Thor: The Dark World

Great film, good acting, strong characters, great action sequences, superb special effects. If you used to read the comics as a child and was an avid fan, this adaptation of your hero couldn't be done better. If you weren't, you will still enjoy this movie for the pure effort put in to making it.

As the critic says quite rightly, this film "will make you want to come back for more."

Blu-ray only worked for one day - Thor: The Dark World review by DH

My Samsung blu-ray player played this disc on the first evening, but on the second would only show a still image of the first splash screen of the disc. So we watched half the film - and didn't get to see the second half.

So, be careful if you want to watch this disc with a Samsung player, even if you had the latest firmware - which we did - you may not be able to see the whole thing.

Much like the rest of Marvel’s Phase Two, Thor: The Dark World is a movie trying to escape the trappings of a conventional superhero movie by testing what can be done, how far aspects of the film can be pushed and twisted to achieve a more unique film experience. However when the experimenting is strictly reserved for the film's action sequences it produces some lovely set pieces but it doesn’t really differentiate Thor from any of the other Marvel features.

Thor: The Dark World follows Thor (Chris Hemsworth) as he returns to Earth to save Jane Foster (Natalie Portman) from a mysterious weapon. However when an age old enemy awakens under the leadership of Malekith (Christopher Eccleston) he must return to Asgard to help them defeat this opponent once and for all and stop what could ultimately lead to the destruction of the known universe.

Much like the other 2013 Marvel release, Iron Man 3, Thor is a film trying to expand the world in which these heroes live in while using new approaches to conventions. While Thor is filled with little jokes and subtle gags, it isn’t the comedy Iron Man 3 turned out to be, in fact it feels more like a science fiction film, a tale of planets and aliens and a war as old as time. In that way Thor could be compared to the latest Superman film, Man of Steel as it further builds upon the realm of Asgard and its neighbouring worlds, adding colour to a world that seemed far too simplistic the last time we saw it.

Supporting characters like Odin (Anthony Hopkins) and Frigga (Rene Russo) get much more to do this time around as Asgard is brought to the forefront but the film still belongs to prisoner and one time royalty Loki (Tom Hiddleston) as he still smarts from his defeat in The Avengers yet hasn’t lost his brilliant wit and charm in his cell.

Watching Loki and Thor verbally spar is the gift that keeps on giving and while Loki is almost absent from the films finale it doesn’t ruin it as viewers are treated to a battle that distorts the rules of physics and bends them to director Alan Taylors will. Thor is a clever and oftentimes witty picture but its the films action that will make you want to come back for more