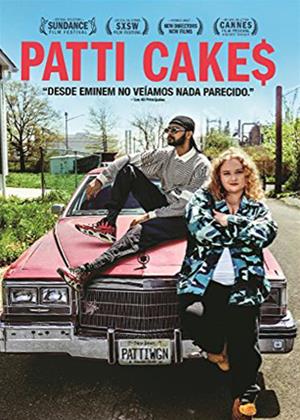 Patti Cake$ exists in world between failure and fantastical, where dreams seem comfortable and uplifting amid the squalor of America’s lesser landscape. Similar to the likes of The Florida Project and American Honey, the tale takes place in a domestic wasteland, where the streets are dirty, the bars are abundant, and there’s no shortage of warehouses or pharmacies. Those who grow up in such an environment are born without hope, escaping into their own worlds of outsider culture if only to shut out the lower-class depression.

Patti (Danielle Macdonald) is one such girl. Her home life is rocky with an unsympathetic mother who had dreams dashed of singing, mom’s boyfriend who looks down on Patti, and an ailing grandmother that is on her last legs which is draining the family funds. Her job at a tavern is very unfulfilling with no chance of moving up. And so she retreats into rap music, daydreaming of a future where she’s a star who rocks the mic and the stage with her lyrics. There’s little escape though. She throws on her XXL skull shirt and pops in the headphones to drift away, only to be rudely thrown back into reality by hecklers on the street. She visits her best friend at the pharmacy who gives her an intro over the PA system, but this is quickly shot down by a superior.

Danielle Macdonald has a very natural talent for stepping into such a role so effortlessly that there’s never a moment where I didn’t believe a character like this exists. The lethargy and anger feels most real, in everything from her sighing awakening to her frustrations upon blowing her chances. She’s also not too shabby at throwing down lyrics, rattling off raps like an undiscovered pro, a talent that unfortunately seems wasted. Much like the character’s mother, the fear of this talent being nothing more than a bar trick are very real, all the more sad that it’s the best bar talent of them all.

All Patti can hope for in such an environment is a rap showdown in the streets, soon to be broken up by fights and cop intervention. This is a stifling environment where all forms of creativity seem to be shot down on sight, even when Patti is so determined. There are moments when we think she is on her way in her scrappy mentality, bringing together outsider talent as their band slowly makes their way into the public eye. But just when it seems things are going alright, something else goes wrong. An altercation at the bar leads to her quitting. Health problems with grandma causes more funds needed, requiring Patti to work full-time as a waitress for a country club. An interaction with a top talent shatters her hopes.

And she keeps at it with an enduring spirit. A film such as this eventually throws her bone, however, contrary to the previous American wasteland dramas I mentioned. But after so much heartbreak and struggling with trying to be a rap artist, it feels warranted that the film would dip into a satisfying end that doesn’t exactly end with Patti becoming a star, but reaching a small victory. It’s a bittersweet resolution for a bitter environment, offering a tad bit of inspiration in a place where none seem to exist. This aspect makes Patti Cake$ more relatable in how it appears darkest just before dawn, faint as the sunlight may be.